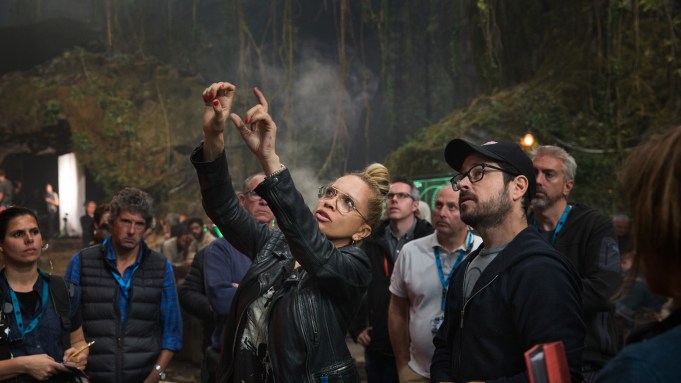 Mahoney is a self-professed “big-bad dreamer.” But as second unit director on “The Rise of Skyalker,” Mahoney is also the first woman to direct a “Star Wars” film. And she’s also the first black woman to do so. It’s an important distinction in a time where Hollywood is more scrutinized than ever for its representation both in front of the camera and behind it. But did she allow herself to dream this big?

“I absolutely did from the beginning,” she told Variety after the film’s world premiere. “You know, I was deeply impacted by the very first time I saw the very first ‘Star Wars’ — it changed my creative DNA. It changed the way I walked the earth. It was just everything.”

“One of the things that was really, really special [about working on set] was that the very first time I called action on a ‘Star Wars’ film was in a test with Daisy Ridley,” Mahoney recalled. “And the very first time I called the word ‘Action’ in a scene when we were in principal photography was Daisy, and then Daisy reminded me that my last shot was with her also.”

Mahoney worked alongside J.J. Abrams to bring the nine-film saga to a close. In November 2017, Abrams reached out to the filmmaker about boarding the project.

“He got straight to it and I sort of had a moment of not hearing everything in total, because once he said the ward ‘Star Wars’ — I thought he was calling me to ask me about, you know, filming some school play,” she quipped.

During an hours-long meeting, the two directors bonded over filmmaking and the impact the “Star Wars” films have had on them personally. “His curiosity was as big and full as mine,” Mahoney recalled. “And then I was on a plane … it was five months from the moment I met J.J. to the moment I went, I couldn’t tell anyone. I’d done two or three jobs in between there.”

Mahoney is hardly a newbie in the business, with acting credits dating back to 1990 and directing her first feature film, drama “Yelling to the Sky” in 2011. Since then, Mahoney has shepherded episodes of “Grey’s Anatomy,” “American Crime,” “Claws,” “Power,” “You,” “Queen Sugar” and “I Am the Night.” And the director says there’s a pattern to each of the gigs she’s landed.

“I have been hired by visionaries every job,” she explained, naming Abrams, Ava DuVernay, Patti Jenkins, John Ridley and Debbie Allen as examples. In fact, it was DuVernay’s recommendation that led Mahoney into the “Star Wars” universe.

“I found out later — when I sat with him, because Ava didn’t tell me that — that he was with receiving lists [of directors]… and he kept getting the same similar lists from all different levels and ranks in the industry, from studios to producers,” she shared. “And so, he called Ava to get her list, because he imagined she would have a great list, and she said ‘I have a great list J.J., but I’m only going to give you one name and one name only – Victoria Mahoney.’”

Explaining why she feels her fellow filmmakers have been so supportive, Mahoney said that it comes down to the old school idea of searching for a “worthy opponent.” “Serena Williams doesn’t want to go on a court with someone who [plays soft],” she explained. “She wants someone who comes hard, someone who challenges her or makes her move in different ways and play a different game and grow her game.”

“They’re all really creative people who always want the chance to call someone like me. … But the system wasn’t permitting it. So now, they get to call and say, ‘Here she is’ and boom, they get to make the call. But the people who were never interested in outliers, still aren’t, in my observation.”

Of celebrating her big credit on “Rise of Skywalker,” Mahoney is focused on the team win. “I had as much excitement, seeing the crew members, as I did my own name. I was just like geeking out on all the people who are dear to me and worked so hard,” she recalled. “It’s bigger than one individual.”

But she also recognizes the power of her achievement and the potential impact it will have on other female filmmakers.

“It’s a living legacy and I hope that I’m alive long enough to see this as the new norm in any capacity. I will go past ‘Star Wars and because, you know, this is an industry wide challenge — this is not a one film, one franchise,” she said. “So, I am hoping that we get to continue seeing an effortless choice to employ women directors who come straight out of Sundance with a $20,000 film like our peers or come from YouTube and have no proof that they can handle a budget North of $140 million. But it’s like, ‘Here’s some trust, here’s some money, let’s see what you can do.’”