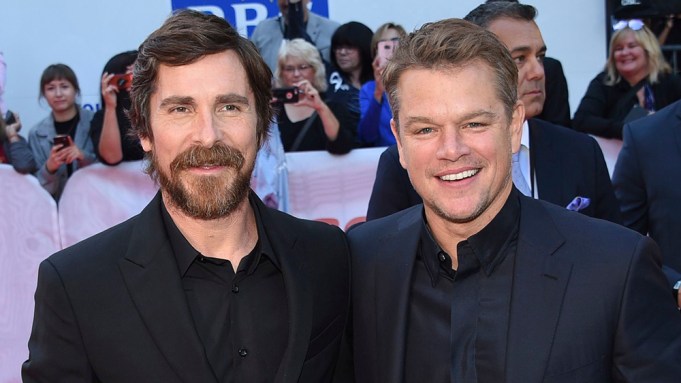 Matt Damon didn’t mind getting punched in the face by Christian Bale when their characters come to blows in the upcoming “Ford v Ferrari.”

“We had so much fun,” Damon recalled at the Toronto Film Festival during an interview at the Variety Studio presented by AT&T. “The key to that fight scene was trying to keep a straight face because nobody won the fight. It was pretty pathetic. The key to that fight is like fighting with your brother. You don’t really want to hurt each other.”

In the real-life drama directed by James Mangold, Damon plays Carroll Shelby, the legendary automotive designer who was hired by the Ford Motor Co. in the 1960s to build a race car and form a team that could beat Ferrari in the 24 Hours of Le Mans race in France. Bale portrays British race car driver Ken Miles enlisted to try and drive the Ford GT40 to victory.

“It’s about friendship,” Mangold said. “It’s about people who work together and the kind of bonds you make making things together. The way I connected with it wasn’t really through racing. I felt something similar to what we feel making movies. Every movie is live or die. Every movie feels like you’ll be destroyed if it doesn’t work out. Every movie is a fight for the money. You’re always fighting and yelling for the space to create.”

And one of the most impressive things created in “Ford v Ferrari’ are the very realistic racing sequences. “I would love to say, ‘Oh, man, we did all our own driving.’ That would sound good, wouldn’t it?” Bale said. “But I had to keep reminding myself, I’m acting as though I know what I’m doing. We had some of the best racers and drivers in the world. If we had been doing the driving, those racing sequences wouldn’t have been nearly as exciting.”