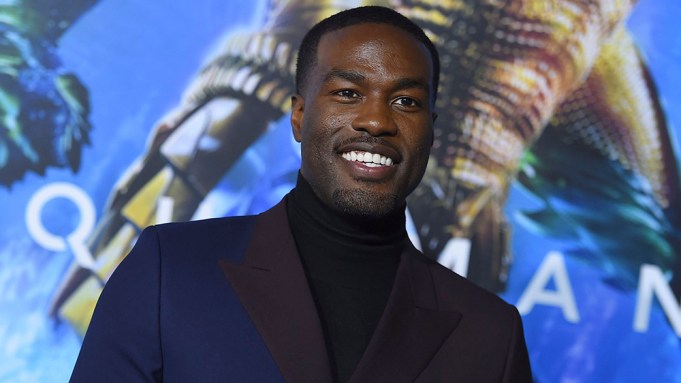 “Aquaman” star Yahya Abdul-Mateen II has landed one of the lead roles in the latest installment in the “Matrix” franchise.

Sources tell Variety that director Lana Wachowski met with actors for the secret role over the last week and in recent days, Abdul-Mateen emerged as the frontrunner to join Keanu Reeves and Carrie-Anne Moss, who will be reprising their roles in the film.

Warner Bros. announced in August that a fourth “Matrix” movie is officially in the works, with Reeves and Moss returning and Wachowski on board to write and direct. Warner Bros. Pictures and Village Roadshow Pictures will produce and globally distribute the film.

In addition to Wachowski, the script was also written by Aleksandar Hemon and David Mitchell. Wachowski is also producing with Grant Hill. The film is expected to begin production at the beginning of 2020.

Warner Bros. has been trying for the last couple of years to find a way back into “The Matrix” universe, but a hold-up over producing rights slowed the project down. The studio has recently seen the opportunity to ramp up development, with Reeves boasting a strong summer that included box office hits “John Wick: Chapter 3 – Parabellum” and “Toy Story 4,” in addition to a solid script from Wachowski.

Plot details are currently unknown and while it was rumored a young Morpheus could appear in the movie, sources close to the film would not confirm Abdul-Mateen’s specific role.

The three previous films — “The Matrix,” “The Matrix Reloaded” and “The Matrix Revolutions” — have collectively earned more than $1.6 billion at the global box office. All three were written and directed by Lana and her sister, Lilly, and starred Reeves and Moss.

In addition to his breakout role as Manta in Warner Bros.’ “Aquaman,” Abdul-Mateen portrayed Lupita Nyong’o’s character’s father in Jordan Peele’s hit “Us” and had a starring role in an episode of “Black Mirror.” He will appear as Cal Abar in HBO’s “Watchmen” TV series, which also stars Regina King and Don Johnson.

Abdul-Mateen was most recently cast to play Black Panther co-founder Bobby Seale in Aaron Sorkin’s “The Trial of the Chicago 7” and landed the titular role in the Peele-produced “Candyman,” set for release in 2020. He will topline the Netflix drama “All Day and a Night” alongside Jeffrey Wright. He is repped by WME and Anonymous Content.