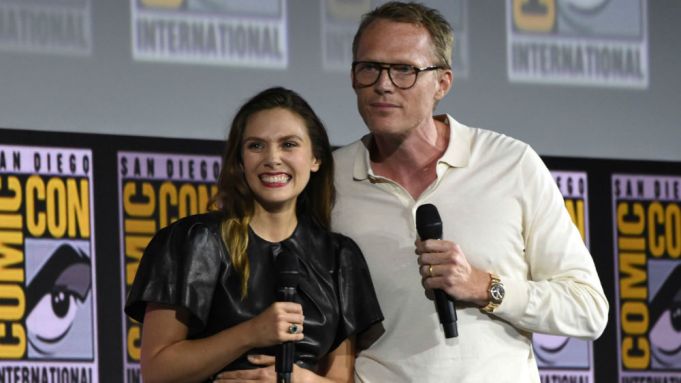 In a triumphant return to the San Diego Comic-Con main stage, leadership at Marvel Studios managed some splashy surprises and showed off risky creative bets for the next two years of content coming from the superhero operation.

But the biggest takeaway from the Saturday presentation inside Hall H was how important Marvel will make Disney Plus, the new digital streaming product and Netflix rival that the Walt Disney Company is launching in November.

While Variety previously reported that Marvel’s TV series would share the same worlds of the cinematic universe, it was made abundantly clear by Marvel Studios president Kevin Feige that a Disney Plus subscription will be essential for keeping current on the narratives fans will see in theaters.

When the sequel “Doctor Strange in the Multiverse of Madness” hits in May 2021, Benedict Cumberbatch will be joined by his fellow Avenger Elizabeth Olsen, aka Scarlet Witch. But to understand the events that led her to the big screen, you’ll need to watch the Disney Plus original “Wandavision,” coming in the spring of 2020.

Likewise, a civilian unfamiliar with the MCU who wants to check out Tom Hiddleston in the Disney Plus original “Loki” will need to rewatch “Avengers: Endgame,” for a blink-and-miss moment that explains Loki’s return after his demise in “Infinity War.”

The mere visual of Disney Plus programs occupying equal space on a graphic timeline of upcoming Marvel movies — projected wide in Hall H — lent the service a kind of cachet that earlier looks at the platform failed to inspire.

Marvel has long rejoiced in making audiences students in their craft, hiding easter eggs in films and even training a generation of moviegoers to stay glued to their reclining seats through end credits for bonus scenes that tease the next adventure. Their Disney Plus efforts take that myth-building to the next level, and it’s a lucrative one as the service will cost $7 a month to start.

While this hulked-up new content pipeline is a brilliant corporate strategy, it should not suggest that Marvel’s shows will merely be bridge content for tentpole films. Feige said “Wandavision” was the most out-there piece of content the studio has ever made. It was also the title that revealed the least in Hall H, only showing an animated logo in a vintage-looking font that came accompanied by the sounds of radio frequencies.

“The Falcon and the Winter Soldier” will see Anthony Mackie and Sebastian Stan face off against “Captain America: Civil War” villain Daniel Bruhl, and Jeremy Renner’s “Hawkeye” looks to be making his standalone series a family affair (his bow-wielding children were referenced often in the final two films of the Infinity Saga).

All of those titles are anchored by legacy characters introduced in the 11 years that Marvel has risen to cultural dominance. The theatrical slate, on the other hand, is highly experimental. While sequels to “Black Panther,” “Captain Marvel” and “Guardians of the Galaxy” were all confirmed to be in development, the next eight films dated through 2022 have some compelling wildcards.

The most curious could arguably be “Eternals,” based on a trippy Jack Kirby comic series about 35,000-year-old alien beings. It’s entirely new intellectual property that takes Marvel back to the drawing board. They’re relying on one of their signature moves to establish that film, in hiring hot young talent and A-list names no film fan could refuse.

Kumail Nanjiani and Brian Tyree Henry got pop-star-level reception in the room when the cast was revealed, as did a fierce and maternal Salma Hayek. But it was when Feige introduced Angelina Jolie as the final member of the “Eternals” ensemble that the hall ignited. Fans stood on their feet, and Jolie seemed winded telling the crowd how excited she was to be there. Currently in production, the title is scheduled for a November 2020 release.

Equally interesting was director Scott Derrickson’s plan for Doctor Strange. Speaking with Feige on stage, he said he would only return to the franchise if they could explore the darker edges of the sorcerer’s comic narratives — to the point of labelling it the MCU’s first horror film. That’s for May 2021.

The most on-brand Marvel offering was also its most culturally significant, with “Shang-Chi and the Legend of the Ten Rings.” Long brewing as the first ever superhero film to feature an Asian lead, this portion packed additional punch by introducing its just-cast star Simu Liu, and additional casting in Awkwafina and Tony Leung. The character Shang-Chi is known as the master of kung-fu, and will hit in February 2021.

Marvel did trot out some familiar faces: Scarlett Johansson is mid-shoot on “Black Widow,” a gritty prequel that some social media users likened to the Bourne series for its brutal, naturalistic violence. Chris Hemsworth will also return for a fourth go at “Thor,” in a sequel titled “Love and Thunder.” That reteams him with director Taika Waititi and costar Tessa Thompson. His founding love interest Natalie Portman returns, but this time as a female version of Thor.

In his parting words, Feige revealed that Oscar winner Mahershala Ali was joining the family to reboot “Blade,” about a human with vampire strength. He also alluded to getting to work on developing the Marvel properties he inherited when Disney acquired 20th Century Fox earlier this year, including the Fantastic Four and mutants of X-Men.