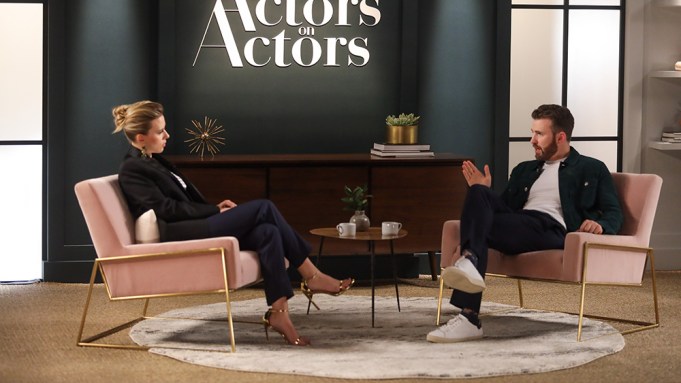 Scarlett Johansson (“Marriage Story”) isn’t afraid to ask for another take and she encourages young actors to do the same.

Johansson revealed her thought process behind multiple takes while shooting during an intimate conversation with Chris Evans (“Knives Out”) for “Variety Studio: Actors on Actors.”

“I feel like if you have an idea — and this is probably good advice for actors that are kind of coming up or starting out in film — if you have a good idea for something, you should ask for another take. Or you feel like you maybe have something else in you that you’re curious about, you should ask for another take because it will haunt you, forever.”

The interview began with Johansson asking Evans how he felt about working with “Knives Out” director Rian Johnson. Evans revealed that Johnson would wrap a scene after two takes and the actor didn’t feel comfortable asking for more at first. Because what if it doesn’t get better. To that response Johansson countered with a piece of advice for new or just beginning actors. “If you have a good idea for something, you should ask for another take,” she said. “Or you feel like you maybe have something else in you that you’re curious about, you should ask for another take because it will haunt you forever.”

“Noah [Baumbach, director of ‘Marriage Story’], in stark contrast to Rian, is relentless,” Johansson said. “You can do 45, 50 takes, you know he only uses one camera, and he’s very specific about the words. Every hesitation and every unfinished sentence and everyone talking over each other is all completely scripted and nothing is improvised.”

“Nothing is improvised in that movie?” Evans asked.

“Not a single word,” Johansson confirmed.

“You guys both need Oscars.”

Variety‘s “Actors on Actors” issue will hit newsstands Nov. 12. The Emmy-nominated companion series will air on PBS stations and the World Channel starting in January. Check back for more from Johansson, Evans and the other best actors from this year’s film season.