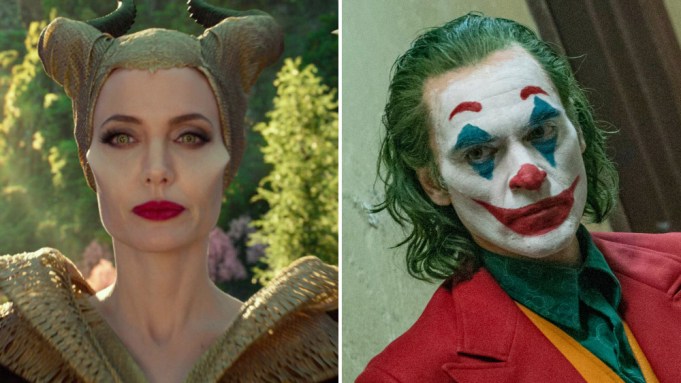 “Maleficent: Mistress of Evil” took in about $4.82 million on Friday while “Joker” yielded $5.4 million, hinting that “Joker” may end up the winner.

The gritty drama starring Joaquin Phoenix in the titular role has so far totaled $258 million domestically for Warner Bros. with an additional $512 million overseas. Todd Philipps directed “Joker,” which garnered controversy ahead of its release for its sympathetic depiction of the villain, from a script he co-wrote with Scott Silver. Zazie Beetz, Robert De Niro, and Frances Conroy also star. It recently passed “Deadpool 2” as the highest-grossing R-rated movie worldwide, and should surpass $800 million this weekend.

Meanwhile, “Black and Blue” is launching with about $8.2 million from 2,062 locations, which could land it the No. 5 slot. The action thriller reeled in about $3 million on Friday.

“Black and Blue” follows a rookie cop (Naomie Harris) who inadvertently captures the murder of a young drug dealer by corrupt cops on her body cam. Tyrese Gibson alson stars. Deon Taylor directed with Peter A. Dowling penning the screenplay. Sony’s Screen Gems is distributing the film, which was produced for $12 million.

STX Films is debuting “Countdown” at 2,675 theaters. The horror pic earned $3.14 million on Friday for an estimated $8 million opening.

“You’s” Elizabeth Lail stars as a young nurse who downloads an app that claims to predict exactly when a person is going to die and tells her she only has three days to live. With time ticking away and death closing in, she must find a way to save her life before time runs out. Talitha Bateman, Peter Facinelli, P.J Byrne, Jordan Calloway and Tichina Arnold also star. Justin Dec directed the film on a $6.5 million budget.

Long-delayed historical drama “The Current War” will also see the light of day this weekend, and is heading for about $3 million from 1,022 locations after taking in $947,000 on Friday. The Weinstein Company was originally on board to distribute the movie following its premiere at the 2017 Toronto Film Festival, but it was shelved and sold after the Weinstein scandal shuttered the company.

Two other holdovers will round out the top five, with Sony’s “Zombieland: Double Tap” and United Artists Releasing’s “The Addams Family” estimated to bring in nearly $12 million and $11 million, respectively. The “Zombieland” sequel has so far grossed $35 million since its Oct. 18 release, while “Addams Family” has racked up $61 million in its first three weeks.

Sony is also re-releasing Quentin Tarantino’s “Once Upon a Time in Hollywood” at 1,674 locations. The comedy-drama, which took in $160,000 on Friday, is on its way to about $515,000 for the weekend. Over 10 minutes of four additional scenes were added before the start of the film and during the end credits for the re-release. The movie, which stars Brad Pitt and Leonardo DiCaprio, earned $139 million domestically in its original run.