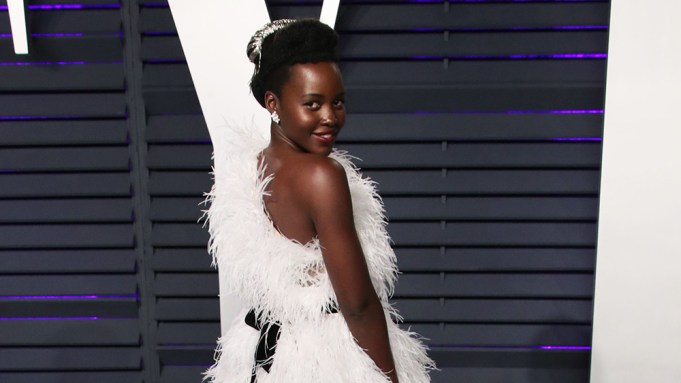 Lupita Nyong’o made a significant statement with her choice in jewelry at the Academy Awards.

The “Black Panther” actress wore a “Wakanda Forever” bespoke ring, which was designed specifically for the actress, who wanted to honor her Oscar-nominated film, as well as her work with the Time’s Up movement through her jewels.

The ring also celebrated Nyong’o’s work with Time’s Up, by way of the black diamonds around the center 10 carat ethically-sourced Forevermark diamond, a nod to the movement’s black dress code at last year’s award season to stand in solidarity with all women who have been impacted by sexual harassment.

The designer, Kassam, also created Ashley Judd’s custom Time’s Up ring at last year’s Oscars. Nyong’o’s stylist Micaela Erlanger asked the jeweler to create a custom ring for the “Black Panther” star, after she saw Judd’s ring and was inspired by the Times Up significance.

Nyong’o’s ring was adorned in 14 diamonds on each side, symbolizing her 2014 Oscar win for “12 Years A Slave,” and the words “your dreams are valid” are carved into the ring, quoting the actress’s Academy Awards acceptance speech when she gave a heartfelt message to children on stage.