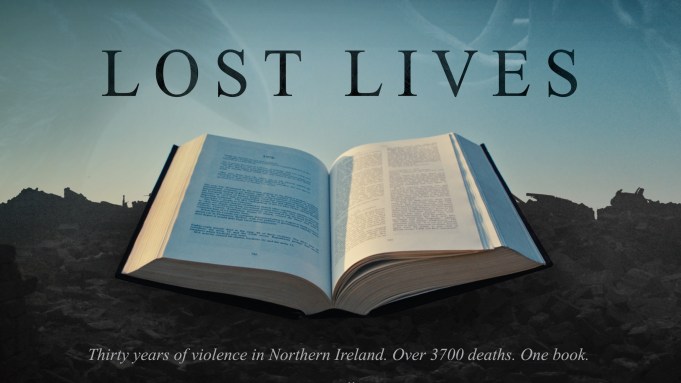 Footage from Dermot Lavery and Michael Hewitt’s “Lost Lives” offers a glimpse of some of the victims of the conflict in Northern Ireland, known in Britain and Ireland simply as “the Troubles.”

The nonfiction film has its world premiere at the London Film Festival on Thursday. It has a roster of big-name Irish actors narrating, including Kenneth Branagh, Adrian Dunbar, Brendan Gleeson, Susan Lynch and Liam Neeson.

The film project is based on the book of the same title, which was written over seven years by five journalists. They set out to record the circumstances of every single death in the conflict, which was formally ended by the 1998 Good Friday peace agreement, although violence has occasionally flared since. The book has 3,700 entries. The final one is for Lyra McKee, a journalist fatally shot in 2019.

Lavery and Hewitt describe the project not as a documentary but “a filmic response to the book.” They said: “It is a film that weaves together high end cinematography, archive film, a commissioned score performed by the Ulster Orchestra as well as a number of extracts from the book, read by the very best of our acting talent.”

In the clip, shared exclusively with Variety, there is archive footage of a mother who lost two sons in the Troubles.

The future of the border between Northern Ireland and the Irish Republic is currently a key issue in Britain’s Brexit discussions with the European Union, which the “Lost Lives” directors said lends their film contemporary resonance. It is “a cinematic event that addresses the past – but looks to the future,” they said.