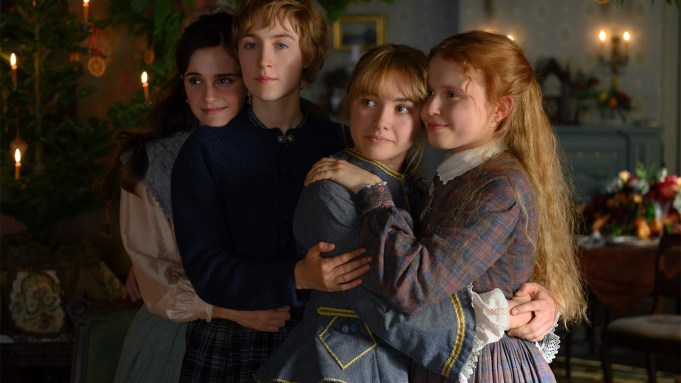 Greta Gerwig’s “Little Women,” which she wrote and directed for Sony Pictures, is one of the great film achievements of the year. To give her film an epic scope — which it has — Gerwig drew from Louisa May Alcott’s classic novel, Alcott’s life and letters, and her own (seamlessly incorporated) original material.

“Little Women” has two timelines: the past, which begins in winter 1861, and the present, which begins in fall 1868. They’re distinguished in the screenplay’s text by red typeface (the past) and black (the present). Unlike Alcott’s novel, which begins with the March sisters as children, Gerwig’s “Little Women” starts in the present, with them launching their adult lives. “JO MARCH, our heroine, hesitates,” are the first words of Gerwig’s script. Jo (played by Saoirse Ronan), as “Little Women” readers are aware, isn’t known for being hesitant, which Gerwig’s next lines make clear. “In the half-light of a dim hallway, she exhales and prepares, her head bowed like a boxer about to go into the ring,” Gerwig writes. “She puts her hand on the doorknob. A pause, and then, she opens it onto a disorderly room.”

That first scene is a meeting with a publisher. As a woman in the mid-19th Century — one who doesn’t want to marry, only wants to be a writer, and to seek control over her writing — Jo is going to struggle. Gerwig films Jo writing like she’s filming a fight scene: Because she is.

The March sisters — Florence Pugh (Amy), Eliza Scanlen (Beth) and Meg (Emma Watson) — are learning how to be. Putting on plays, squabbling and then coming back together, and growing into adulthood requires a lot of talking. In the screenplay, Gerwig uses side-by-side dialogue to show how these overlapping conversations are conducted, so you can actually hear them on the page.

In years to come, this film will be considered a classic. So let’s just call it that now.