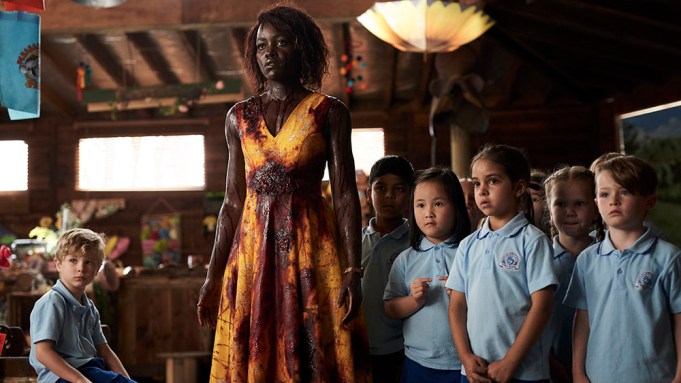 Lupita Nyong’o is a zombie-attacking schoolteacher in the newest trailer for Hulu’s upcoming “Little Monsters.”

The slasher-comedy follows washed-up musician Dave (Alexander England), who volunteers to chaperone his nephew’s elementary school field trip after developing a crush on his fearless kindergarten teacher Miss Caroline (Nyong’o). However, when Dave attempts to win over Caroline from another enthralled man (Josh Gad), a sudden zombie outbreak disrupts his plans. All of a sudden, the trio are forced to fight flesh-eating zombies while dealing with a messy love triangle.

Despite the violence, however, the teaser makes it clear that there will be laughs in store for the audience, too.

“This might be a little much…for everyone,” Nyong’o says when a zombie enters a school-bus, threatening to kill her and her kids.

Nyong’o also tells Gad’s character to “stop f—king swearing,” in front of the kids as murderous zombies lurk outside the classroom.

The Hulu original movie is only one of a handful that the streamer has produced, including a string of documentaries like last year’s Fyre Festival documentary “Fyre Fraud.”

“Little Monsters” will enjoy a limited theatrical release on Oct. 8 before becoming available on Hulu on Oct. 11.