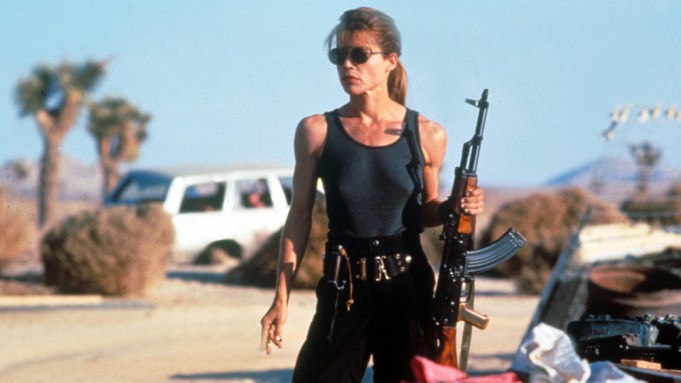 “They’re very forgettable, aren’t they?” she said to Variety‘s Marc Malkin at CinemaCon on Thursday.

Hamilton helped promote “Terminator: Dark Fate,” the sixth entry in the franchise and her return to the series after more than 25 years. She originated the role of Sarah Connor in “The Terminator” in 1984 and reprised it in “Terminator 2: Judgement Day” in 1991, but has since only lent her voice to the franchise for “Terminator: Salvation” in 2009. While “Terminator 3: Rise of the Machines,” “Salvation” and “Terminator: Genisys” averaged $275 million at the overseas box office, they were largely ignored by U.S. auds and panned by critics.

“You start something and you’re invested in the franchise, but somehow the characters that you care about weren’t there. Too many people, too many story points. So I think we’ve done a good job of narrowing down the focus again so it will echo the first two films,” she said.

She also revealed she hesitated at first to return to the series.

“I gave it probably six weeks of intense thinking and consideration before deciding to do it. I wasn’t sure if I wanted to. I didn’t want it to look like a shameless money grab,” she said. “I am living this quiet, lovely life that doesn’t involve being a celebrity, and you really have to think, do I really want to trade that in again for another 15 minutes?”

Even though Hamilton said the script wasn’t finished when she signed on, she said seeing how the characters had changed over time in the new storyline ultimately drew her in. “Dark Fate” serves as a direct sequel to the two original “Terminator” flicks, disregarding the confusing timelines created in the three middle entries and spinoff series.

As for appearing in future “Terminator” entries, Hamilton has a plan, saying. “I’m going to fake my own death so I don’t have to do another one.”