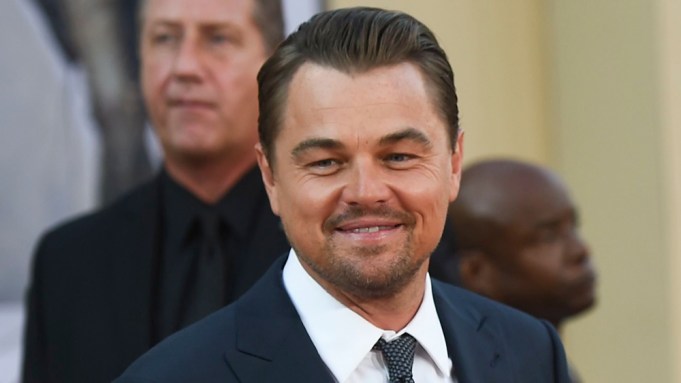 Leonardo DiCaprio is nervous traditional filmmaking may be in danger of extinction.

“We’re entering this age of streaming where things are so immediate and all of a sudden you have a new show, eight episodes of a new brilliant show that comes on that you can watch almost every other day,” DiCaprio told Variety at Monday’s premiere of “Once Upon a Time in Hollywood,” Quentin Tarantino’s look at 1969 Los Angeles.

DiCaprio stars in the movie as a fading Hollywood star with Brad Pitt as his loyal stuntman and now driver.

“So when you’re talking about a movie that’s shot on film where you have all of Hollywood Boulevard that like physically transformed into 1969 with no CGI, this is kind of a real throwback to an era of filmmaking we’re not going to see anymore,” he said.

“In a way it is a bit of a dinosaur,” DiCaprio continued. “I just hope we’re going to have this communal theatrical experience of going to see a great piece of art all together and enjoy it.”

DiCaprio’s words echo many others in Hollywood. Steven Spielberg has become one of the most outspoken powerhouses to decry the at-home “Netflix and chill” movie-going experience.

“I hope all of us really continue to believe that the greatest contributions we can make as filmmakers is to give audiences the motion picture theatrical experience,” Spielberg said in February while accepting the Filmmaker Award at the Cinema Audio Society’s CAS Awards. “I’m a firm believer that movie theaters need to be around forever.”

Spielberg didn’t mention a streamer by name, but said, “I love television. I love the opportunity. Some of the greatest writing being done today is for television, some of the best directing for television, some of the best performances [are] on television today. The sound is better in homes more than it ever has been in history but there’s nothing like going to a big dark theater with people you’ve never met before and having the experience wash over you. That’s something we all truly believe in.”