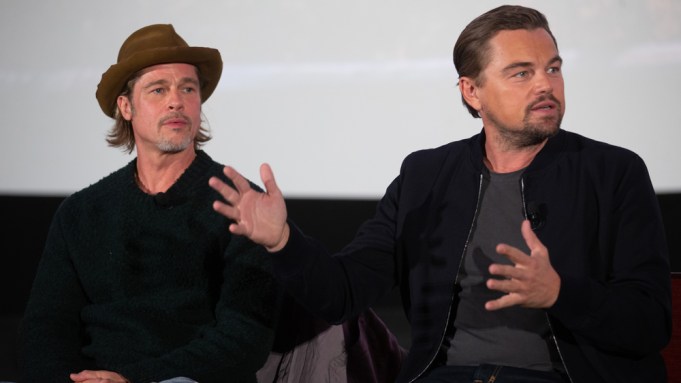 Not only was the flamethrower used by Leonardo DiCaprio to torch Nazi soldiers and a member of the Mason family in “Once Upon a Time in Hollywood” real, but the flames felt by the stuntmen on set were real, too.

“The first day I used that [flamethrower] was a really hard day because they had created this sort of channel — by the way, all the greatest stuntmen in this town’s history showed up for that, it was amazing,” DiCaprio said. “I really had to blast them with a real flamethrower and torch all of them. I started feeling very bad for them, but then soon felt very bad for myself because that heat just wafted right back into my face. I started to get chronic headaches that day. I knew the flamethrower thing was coming back up, but it was in the open air that time, thank god.”

“I did have a laugh when I saw it on the call sheet,” co-star Brad Pitt chimed in. “It said, ‘LDC flamethrower rehearsal.’ I thought, ‘Oh, that’s going to suck.'”

DiCaprio and Pitt — along with fellow “Once Upon a Time in Hollywood” cast members Julia Butters, Margaret Qualley and Mike Moh — joined Variety‘s Marc Malkin for a Q&A session about the production of the Golden Globe-nominated film.

Moh, who goes head to head with Pitt’s Cliff Booth as Bruce Lee, shared the story of director Quentin Tarantino’s surprise decision to film the controversial fight scene in one take.

“Sunday, we’re doing our final stunt rehearsal and we’re all good and we’re about to leave when Quentin pulls me aside. He says, ‘Mike, the way we’re going to shoot this scene, I have a certain idea of how we’re going to do it and it’s going to be one take. And it’s all on you to do it so that I can shoot it the way I want to,'” Moh said. “And uh, he said, ‘So don’t screw it up.’ And I looked at him and I did a big gulp. And I said, ‘You hired the right guy, Mr. Tarantino.'”

Qualley explained how taking an impromptu vacation to Panama led to her scene-stealing role as the seductive Manson family member Pussycat. After she thought she failed her audition, Qualley gave into her father’s cajoling and visited him abroad. While in Panama, her agent called to inform her that Tarantino wanted her to return for a script reading with Pitt.

Being Pussycat was no small feat, however, as Qualley explained that she had nightmares after Tarantino gave her three DVDs to prepare for her character.

Other highlights of the Q&A include DiCaprio and Butters mutually fawning over each other’s acting, the cast members fondly referring to Tarantino as “QT” and the revelation of the chant the director led during filming.

“Let’s do another take,” Tarantino would say on set if things weren’t up to his standards. “Why?”

“Because we love doing movies,” the crew would respond enthusiastically.

This Q&A occured after a screening of “Once Upon a Time in Hollywood” in the Cinerama Dome at ArcLight Hollywood as a part of the Variety Screening Series presented by Vudu.