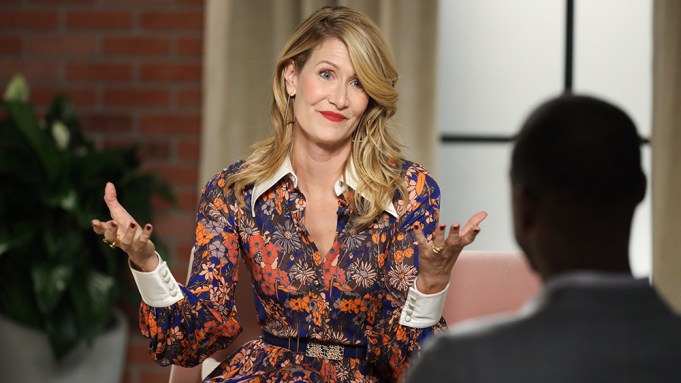 Laura Dern has wanted to act since she was seven years old, and, coming from acting parents including father Bruce Dern and mother Diane Ladd, one may think her parents encouraged the propensity. But according to Dern, that wasn’t the case.

“They didn’t want me to,” the “Marriage Story” actress told Sterling K. Brown during their conversation for Variety‘s Actors on Actors. “My mom discouraged, even. I mean, I think because as a woman in the film industry, she was worried for me, especially as a child — speaking of being comfortable in one’s own skin — for all the challenges, and insecurities and vulnerable rooms that a young girl could be in. She was terrified for me and protective and a lioness, which was great to be raised by. And my dad, I think, assumed I’d find something else interesting.”

Dern and Brown participated in a wide-ranging discussion that touched on Dern’s career transition from a child actor to an adult one.

“I’m growing into my own skin, like, ‘Being a woman is amazing!’ I started making movies as an 11-year-old,” she explained, “so becoming an adult actor is an amazing feeling because you are — I’ve been raised by all these filmmakers that forced me to dive into the deep-end and try things and require that of me. Complicated, amazing, fearless filmmakers who would create insane circumstances or worlds but ask me to be incredibly honest, or have something simple and honest and ask me to be radically insane in those worlds, and I think that’s where you get your bravery. And my parents are incredibly fearless, beautiful actors, and I watched them be fearless in areas and fearful in areas.”

The “Big Little Lies” star discovered a commonality between the two actors as well.

“I think we’re siblings in having meltdowns on television, I think we can own that,” Dern said. “I think between ‘This Is Us,’ ‘Enlightened,’ and ‘Big Little Lies,’ we’ve probably had as many meltdowns as should be allowed.”

Variety‘s “Actors on Actors” will be published in November in a special issue of the magazine timed to Academy Awards voting. The companion TV series premieres on Jan. 2 on PBS SoCal.