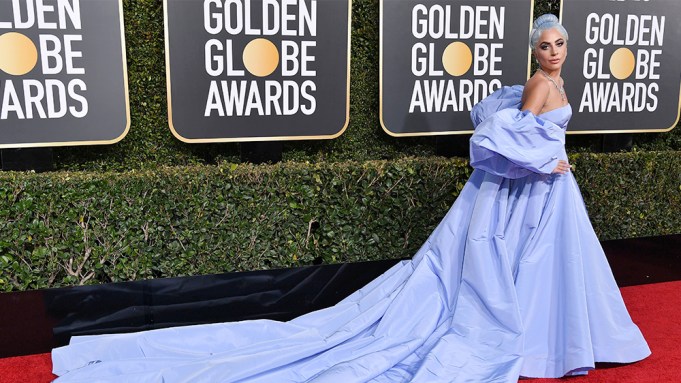 Blue was the new black at this year’s Golden Globes red carpet, at least for Lady Gaga, who sported ice blue-blonde locks and a periwinkle dress so voluminous it required two assistants to help carry its train.

The dress, reminiscent of Judy Garland’s gown in the 1954 “A Star is Born,” was one of a spectrum of fashion trends, including all-white ensembles from host Sandra Oh, “Halloween” star Jamie Lee Curtis, presenter Julianne Moore and Gaga’s own co-star Bradley Cooper – a stark contrast to last year’s all-black ensembles.

Previously, the Time’s Up organization helped coordinate an all-black carpet, prompting a wave of political statements led by a number of prominent celebrities including Reese Witherspoon, Alison Brie, Katherine Langford and Emma Watson.

This year, the Time’s Up movement planned yet another red carpet political statement, this time with new black-and-white ribbons and bands, designed by Hollywood costume designer and stylist Arianne Phillips.

“I was fortunate enough to be here last year with the birth of this movement on this very carpet, and while we’ve accomplished a lot in the last year…we still have a lot of work to do,” Brosnahan told Variety while explaining her reasoning for wearing the ribbon. “While we’re still fighting for safety and equity in the workplace, those are symptoms of a larger problem of an imbalance of power.”

Other stars presented the ribbons on their own, including “The Good Place” actress D’Arcy Carden who highlighted the message against her bright orange handbag. The ribbons, which symbolize that supporters are tied together in their joint commitment to create safe, fair and dignified workplaces for women, are also helping kick off the Time’s Up’s new TIMESUPx2 campaign in recognition of the organization’s second year of work and its call to double the number of women in leadership positions across industries.

Billy Porter dealt with the chilly weather in his own way – a floor length cape complete with intricate floral embroidery and a pink satin lining, which the “Pose” star unfurled throughout the carpet. Sharing in on the drama was Janelle Monae who sported a similarly elegant get-up that included pieces from Chanel’s Egyptian-themed Metiers d’Art collection.

Other prominent fashion moments included platinum-blonde locks on “Sharp Objects” actor Chris Messina, which have already divided the internet, and Jameela Jamil’s red carpet jeans, which she hid underneath a flowing pink gown.