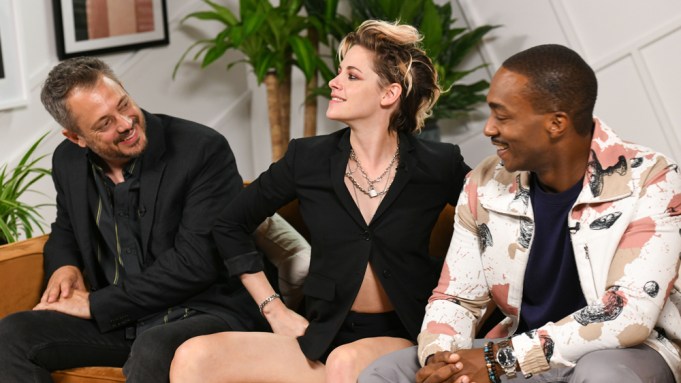 In order to play the doomed film star Jean Seberg in Amazon Studios’s “Seberg,” Kristen Stewart channeled some of her own experiences with invasive paparazzi.

“I didn’t have to fake it,” Stewart said in a wide-ranging interview at Variety‘s studio at the Toronto International Film Festival. “I know that feeling of sort of feeling stolen from. It’s thievery.”

Seberg became a fashion icon after appearing in Jean-Luc Godard’s 1960 movie, “Breathless.” And Stewart said that after meeting with director Benedict Andrews once, she knew he would do Seberg’s story justice.

Beginning in 1968, Seberg was followed by the FBI’s insidious COINTELPRO surveillance program, which was designed by J. Edgar Hoover to undermine leftwing political activists. Seberg, who had aligned herself with the Civil Rights Movement, was taped and photographed wherever she went — and not only because she was famous. The FBI’s secretive tactics made her become paranoid and miserable, and she died at age 40 in 1979 from a possible suicide.

Andrews hopes seeing Seberg’s experience with surveillance culture “hits a raw nerve with the present.” Although Stewart said she doesn’t mind her image in the media “as long as things aren’t distorted and skewed.”

In “Seberg,” the FBI feeds a false story to the press that she was pregnant after an affair with Hakim Jamal (Anthony Mackie), a civil rights activist. The false rumor further adds to her deterioration.

“In our story, those details are wrong and they’re lies,” Stewart said. “And that happens occasionally in a much more superficial way to celebrities — we’re all kind of part of this comic book thing that’s all very fun and lucrative.”

“When it starts to feel like it falsely represents you, and you just feel completely out of control, it feels painful,” Stewart continued. “And I’ve tasted that in a far less intense way. I know that feeling of having to present and wanting to always sort of present your truth, and have it feel impossible to do so. It’s an awful feeling.”

In a recent interview with Harper’s Bazaar, Stewart said she had been told in the past to present herself differently, saying, “I have fully been told, ‘If you just like do yourself a favour, and don’t go out holding your girlfriend’s hand in public, you might get a Marvel movie.'”

“It’s nice to be able to talk about that in a way that people really understand now,” Stewart added. “Instead of sounding like I’m being crazy, like, ‘Don’t put me in a box! Ambiguity’s a cool thing!’ Now, it’s, like ‘duh.’ Before, I had to say it like it was some far out idea. Now it’s more on the mainstage, which is rad.”

Things have evolved so quickly and seamlessly, Stewart said, that she never really had to come out — she was just never really in. “I didn’t really ‘come out.’ It wasn’t like I was not out. I’m so lucky — that wasn’t, like, a traumatic, difficult mountain to climb.”

Nor does she think the roles she’s offered have changed since being an out queer actor — and she cited Marvel only because she was illustrating “it was literally just a big conglomerate-y type thing.”

“I’m sure they would love to hire the gay kids to be superheroes,” Stewart said with a laugh.

Stewart interjected, “A gay one!”

Mackie then continued the joke, saying of his own dealings with Marvel, “It’s been a really wonderful, eye-opening experience to where I’ve been able to work with many —” he then turned to Stewart — ”gay kids.”

When asked whether there was room for a gay superhero on “The Falcon and the Winter Soldier,” Mackie said, “I think [Stewart] should be the gay female Falcon Captain America” as Stewart affected a superhero pose.