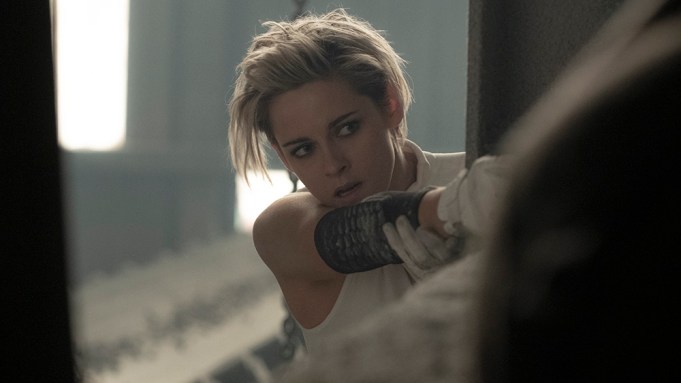 Kristen Stewart decided to star in the reboot of “Charlie’s Angels” because she thought it would be a fun change of pace for her career.

Stewart explained what drew her to the studio tentpole in a conversation with Shia LaBeouf for Variety’s Actors on Actors issue, on newsstands this week.

“Why ‘Charlie’s Angels’?” LaBeouf asks her.

“I wanted to do something fun,” Stewart says. “I was in the mood for a not-so-harrowing experience. Liz Banks, who directed the movie and wrote it, is really good at normal funny. I was in good hands. I knew that. The movie is so warm. I’m proud of the way that it makes me feel.”

“What set do you enjoy more?” asks LaBeouf.

“Probably the harrowing kind, because it’s just more fun in a weird way,” responds Stewart. “Honestly, hanging on set with the girls and laughing all day and thinking of silly stupid stuff to say was really fun, but we did it for five months. I was like, ‘Oh my God. I’m still being a goofball.’ I like sprinting. The thing about big movies for me is I don’t know the difference other than it’s just so long. You spread things out over such a long period of time. I can’t harness things in the way I can when it’s short. Long movies scare me a little bit because I feel like I’m going to want to get the hell out of there, man.”

Stewart then asks LaBeouf if he’s interested in appearing in more studio films.

“It’s really hard to find the studio ones,” Stewart says.

“Yeah, a studio movie about people, I’m all in,” LaBeouf adds.

LaBeouf is in the Oscar race this year for writing and starring in “Honey Boy,” which is based on his own experiences as a child actor. In addition to “Charlie’s Angels,” Stewart is receiving rave reviews for “Seberg,” where she plays 1960 French New Wave actress Jean Seberg.

“Variety Studio: Actors on Actors” is an Emmy Award-winning series that highlights the best TV and movie performances of the year. In addition to Stewart and LaBeouf, the latest season includes conversations between Brad Pitt and Adam Sandler, Tom Hanks and Renee Zellweger, Laura Dern and Sterling K. Brown and Chris Evans and Scarlett Johansson, among others. The series will air on PBS SoCal starting on Jan. 2.