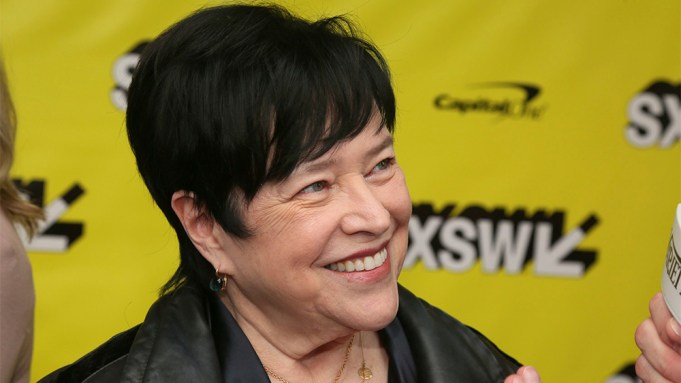 The debate taking place in Hollywood about whether Netflix and other streamers should receive awards consideration for their films has made its way to Austin, Tex. for the South by Southwest festival.

At the premiere of “The Highwaymen” on Sunday, stars Kevin Costner and Kathy Bates had some thoughts on the merits of theatrical releases versus streaming.

“I guess I’m kind of old-fashioned, I’m like Mr. Spielberg,” Bates, who plays Gov. Ma Ferguson in “The Highwaymen,” told Variety‘s Marc Malkin. “I just read about [the debate] in the news the other day and I thought, ‘C’mon, y’all, that’s not fair.'”

“And I also think that being a filmmaker, especially like Spielberg and others, they really want their films to be seen on the big screen,” she pointed out. “That’s why I’m going to sit through [‘The Highwaymen’] tonight because I only saw it on a little bitty screen and it’s different, it’s a different experience.”

Bates went on to question the fairness of giving streaming films a one-week theatrical window.

“I just think, showing them for a week just to qualify, people don’t seem them — I don’t know, I kind of think that’s dirty pool. I shouldn’t say ’cause Netflix has been very, very good to me. I just think that the streaming is one thing, but theater’s another.”

When pressed on just how long streaming films should have to stay in theaters, Bates said they “should play for a while.”

“But good luck having that happen anyway!” she said. “If they don’t do well critically — everybody listens to the critics. I wish people knew how to make up their own minds and not even pay attention to the reviews — go and see it! That’s one thing that’s good about streaming is that you can see something on your own and not be influenced.”

Costner, who plays Texas Ranger Frank Hamer in John Lee Hancock’s crime film, seemed to feel the debate was somewhat outside his purview, explaining that he could see both sides of the debate.

“I hear all the arguments,” he continued. “When you hear intelligent people talking, almost after one finishes, you go, ‘Yeah, that’s a good point.’ And if you’re really listening and if you haven’t already made up your mind, then you listen to somebody else and you go, ‘That’s equally a good point.’ I always find that with thoughtful people as they look at an issue.”

Ultimately, however, Costner indicated movies are best experienced in theaters.

“The Highwaymen” producer Casey Silver said he loves “the theatrical experience,” but “I also think it’s great for people to see the movies, to see the stories, to see cinema wherever they see it. The world keeps changing.”

“The Highwaymen” will be in theaters on March 15 before debuting on Netflix on Mar. 29.