Continue to Variety SKIP AD
You will be redirected back to your article in seconds
Nov 15, 2019 8:03am PT 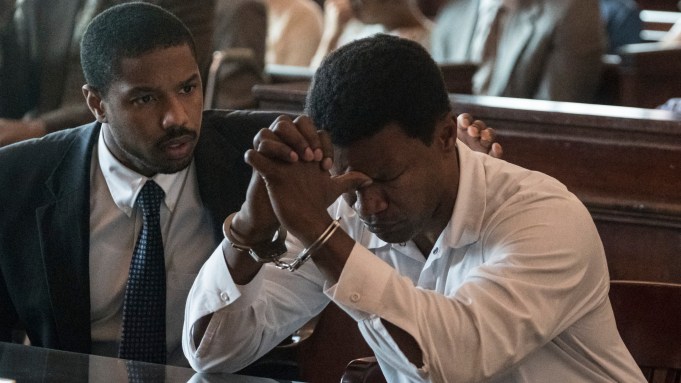 Hollywood and the Oscars have a long history of legal dramas, from the 1931 “A Free Soul” (lead actor, Lionel Barrymore) through the 1982 “The Verdict” (five nominations), to the 2007 “Michael Clayton” (seven noms, including supporting-actress winner Tilda Swinton).

So Warner Bros.’ “Just Mercy,” which plays at the AFI Fest in Hollywood this month and opens theatrically in the U.S. on Christmas Day, could do well.

“Just Mercy” uses the staples of courtroom drama: The setbacks, the reversals, the “backstage” lives of the prosecutors and/or defending attorneys. That will be a major asset to Oscar voters who like well-structured pieces. But it’s not shiny-new flashy filmmaking, which is its biggest plus and its biggest challenge.

Last year, “Green Book” and “Bohemian Rhapsody” were dissed endlessly because they featured storytelling that could have been made 20 years ago, as opposed to such cutting-edge movies as “The Favourite,” “Vice” and “Black Panther.” But many voters embraced those 2018 movies.

Courtroom fireworks have been a staple of stage and film for decades. The honor roll includes best picture nominees — Billy Wilder’s “Witness for the Prosecution” (1957), Otto Preminger’s “Anatomy of a Murder” (1959) and Stanley Kramer’s “Judgment at Nuremberg” (1961) with six, seven and 11 nominations, respectively. Other Oscar contenders include “And Justice for All,” “My Cousin Vinny,” “The People vs. Larry Flynt,” “Primal Fear” and, for legal process from a different angle, “12 Angry Men” (1957).

“Just Mercy” marks Destin Daniel Cretton’s big leap from small indie films to a big-studio starry production, and it addresses the important topic of criminal justice reform. Those are two interesting talking points, and kudos to Warner Bros.’ Toby Emmerich. So why didn’t the film make more of a splash at the Toronto Intl. Film Festival?

When “Just Mercy” debuted in September, TIFF audience reaction was positive, but media attention paled compared to the big story out of the festival: “JLo Might Get an Oscar Nomination!” We live in a click-bait world, and those think-pieces about Jennifer Lopez and “Hustlers” — I use the term “think” loosely — naturally got a lot more clicks than those about other films.

In the 21st century, big-screen legal dramas have become rarer. Blame Scott Turow, John Grisham, “Law & Order” and procedural series, which have been satisfying the public’s need for examples of the law at work.

There are also many films that weren’t legal dramas per se, but featured a climax set in a courtroom, including Oscar winners “To Kill a Mockingbird,” “Kramer vs. Kramer,” “The Accused” and “Chicago,” and multiple-nominated “Peyton Place” and “A Few Good Men.” Also screening at AFI Fest is Neon’s “Clemency,” with a remarkable performance by Alfre Woodard that merits serious awards consideration.

Both “Clemency” and “Just Mercy” feature detailed scenes of executions. The 1958 “I Want to Live” (which won the Oscar for Susan Hayward) set a high standard for vivid depiction of execution. (It’s worth noting that Robert Wise directed these harrowing scenes not long before he made “The Sound of Music.”) The sequences in “Clemency” (directed by Chinonye Chukwu) and “Just Mercy” aren’t fun to watch, but they’re examples of expert filmmaking.