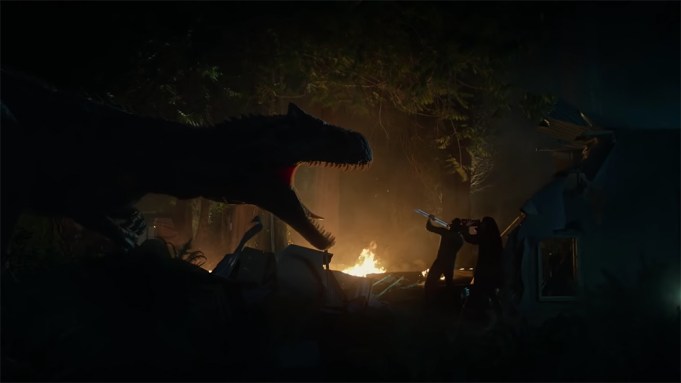 Dinosaurs are roaming the Earth again.

The 2018 blockbuster — starring Chris Pratt and Bryce Dallas Howard — ends with dinosaurs breaching the confines of Isla Nublar and finding a new home out in the open world. So when a Nasutoceratops mom and baby wander onto a campsite in “Battle at Big Rock,” that’s presumably just par for the course in the new dino-integrated planet.

The encounter seems initially harmless. The creatures may be horned and massive but they’re herbivores. The family — portrayed by André Holland, Natalie Martinez, Melody Hurd, and Pierson Salvador — need only wait for the gentle giants to move along. That is, until a carnivorous Allosaurus darts into the scene and things get violent, to say the least. The family goes into survival mode as the dinosaur’s jaws rip apart the mobile home, trying to nab a human as its next snack.

A post-credits scene of dinosaurs disrupting civilization suggests a much more perilous existence for everyday people in the ensuing “Jurassic World” universe.