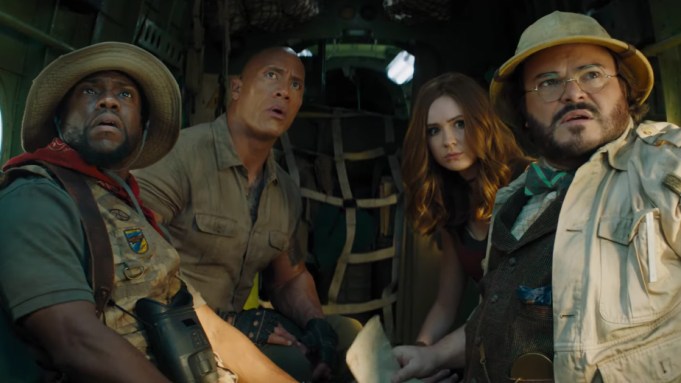 Dwayne Johnson, Kevin Hart, Karen Gillan and Jack Black are heading back to the jungle. Sony debuted the first look at “Jumanji: The Next Level,” a sequel to the 2017 surprise hit “Jumanji: Welcome to the Jungle.”

In the upcoming adventure the gang returns to Jumanji only to find the video game world looks a little different. The twist this time around is that the grandfathers (played by Danny DeVito and Danny Glover) of two original players get transported into the game as Johnson and Hart’s avatars. The new players will have to brave the elements to escape the dangers that lurk and save Jumanji.

“This next adventure is even more challenging, and remember the future of Jumanji is in your hands,” Rhys Darby, who portrays the players’ in-game guide, warns the crew.

“I have one important question,” Johnson’s character asserts. “Who is Jumanji?”

Hart offers up, “Is that Barbara’s boy?”

Jake Kasdan returned to direct the movie, which he co-wrote with Jeff Pinkner and Scott Rosenberg. This go-around, Awkwafina, Danny DeVito and Danny Glover joined the cast. The movie was produced by Matt Tolmach, Jake Kasdan, Johnson, Dany Garcia and Hiram Garcia.

“Jumanji: Welcome to the Jungle,” based on the 1995 film with Robin Williams, became a huge box office smash, grossing over $962 million worldwide. The follow-up hits theaters on Dec. 13.