Box Office: ‘Jumanji: Next Level’ Swings to $4.7 Million on Thursday 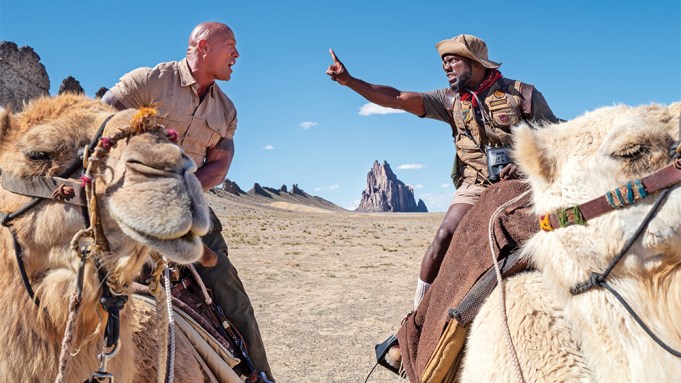 “Jumanji: The Next Level” swung to $4.7 million at 3,778 North American locations on Thursday night.

Sony’s comedy sequel is expected to dominate the weekend with a studio forecast of about $35 million at 4,227 venues — nearly equal to the first weekend of 2017’s “Jumanji: Welcome to the Jungle.” Rival forecasts are projecting a higher launch in the $45 million range.

“Jumanji: The Next Level” is opening two years after “Jumanji: Welcome to the Jungle.” The sequel, which carries a $125 million budget, finds the main characters returning to Jumanji to rescue one of their own, but discovering that nothing is as they expect.

Jake Kasdan returns to direct from a screenplay he co-wrote with Scott Rosenberg and Jeff Pinkner. Matt Tolmach produces with Seven Bucks’ Johnson, Dany Garcia and Hiram Garcia, along with Kasdan. Reviews have been mostly positive, earning the pic a 69% score on Rotten Tomatoes.

In a similar scenario, Disney is opening “Star Wars: The Rise of Skywalker” on Dec. 20 amid expectations of another blockbuster performance.

Warner Bros. drama “Richard Jewell” is opening at 2,502 sites and the Universal-Blumhouse dark thriller “Black Christmas” will debut at 2,625 venues. Both are forecast to launch in the $10 million to $12 million range.

Directed by Clint Eastwood, “Richard Jewell” is a biographical drama based on the security guard falsely accused by the media for playing a part in the 1996 Olympics bombing. The movie stars Paul Walter Hauser, Sam Rockwell, Kathy Bates, Jon Hamm and Olivia Wilde.

The Atlanta Journal-Constitution has asked Warner Bros., Eastwood and screenwriter Billy Ray to acknowledge that some of the events in the film were “imagined for dramatic purposes,” over Wilde’s portrayal of a Atlanta Journal-Constitution journalist trading sex for scoops. Warner Bros. is standing by the movie. Wilde tweeted on Thursday that she was not in control over how her character was portrayed.

“Black Christmas” is directed by Sophia Takal in a remake of a 1974 slasher film about sorority girls being stalked by an unknown killer. Imogen Poots, Aleyse Shannon, Lily Donoghue and Brittany O’Grady star in the movie, which currently holds a Rotten Tomatoes score of 41%.

Disney’s fourth weekend of “Frozen” should finish second in the $20 million to $25 million range behind “Jumanji: The Next Level,” and ahead of “Black Christmas” and “Richard Jewell.” “Frozen 2” has taken in $345 million in its first 20 days in North America.

“Three very different newcomers will set the table for a most welcome holiday season feast that should improve the fortunes of the industry as we gain some box office yardage before the clock runs out on the year of 2019,” said Comscore senior media analyst Paul Dergarabedian. “And with ‘The Rise of Skywalker,’ ‘Cats’ and other notable titles on the way, $1 billion-plus could be in the cards for the final 19 days of the year.”