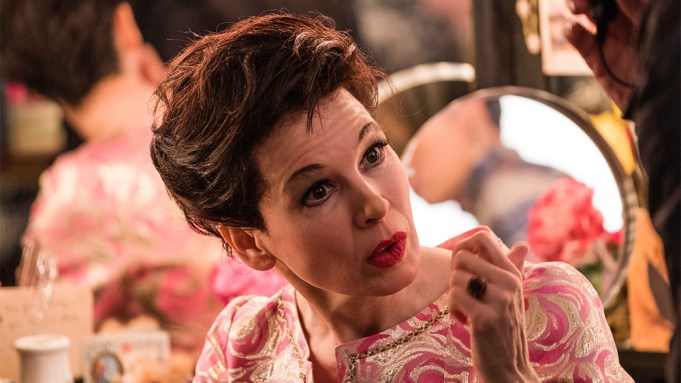 The glitz and glam of Judy Garland’s prolific career didn’t come easy. In the new trailer for “Judy,” Garland (portrayed by Renee Zellweger) fights through her fair share of emotional and financial turmoil.

“Judy” shows the world through Garland’s eyes 30 years after her star-making role in “The Wizard of Oz.” The musical biopic is set late 1960s shortly before Garland’s death, focusing on the performer’s run at the Talk of the Town club in London.

The new footage, which was first teased during London Pride over the weekend with a special introduction by Zellweger, sees Garland arrive at a hotel with her two children, only to find that her suite has been released because her account was in debt. With her home and manager lost, Garland is offered a job in London, but she must leave her children in America in order to take it.

“You’re saying I have to leave my children if I want to make enough money to be with my children?” Garland asks before cutting to her backstage at the Talk of the Town.

The clip also showcases Garland’s stage fright, her blossoming relationship with her soon-to-be fifth husband Mickey Deans (played by Finn Wittrock of “American Horror Story”), hospital visits, scenes of a young Garland on the set of “The Wizard of Oz” and Garland in the throes of her spirited, glamorous London performances.

“You can’t have the world’s greatest entertainer out here without a drink,” Deans says to Garland at a party.

“Frank is great, but he’s no Judy Garland,” he asserts.

Near the end of the trailer, the thrills of London show business turn grim with a doctor saying that Garland needs to take better care of herself and asks if she takes anything for depression.

“Everybody has their troubles. And I’ve had mine. I just want what everybody wants, I just seem to have a harder time getting it.” Garland says over a rendition of “Somewhere Over the Rainbow.”

She asks the crowd, “You won’t forget me will you? Promise you won’t.”