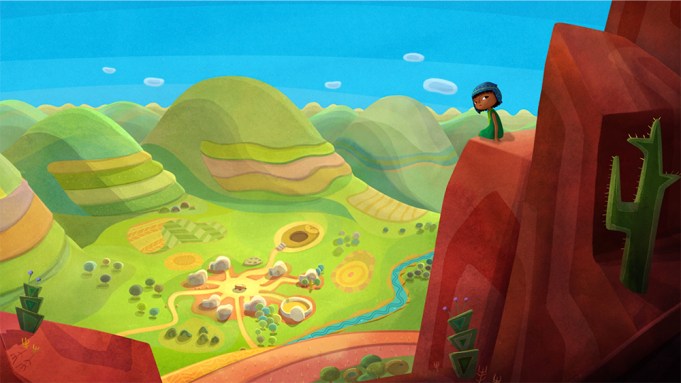 Writer-director Juan Antin worked for 14 years to make “Pachamama,” which tells the tale of a young boy growing up in the Andes in the time of the Incas and the Spanish explorers, and now the animated film will be seen by a global audience when it debuts on Netflix on Friday, June 7.

“The idea came one day when I was at a festival in Cuba presenting my first film, ‘Mercano the Martian,'” explains Antin. “I was staring at the sea and I had a vision. I imagined all those ships coming in from Europe and Spain 500 years ago. I said, ‘Wow, I can imagine how the indigenous people saw these men arrive and thought they were gods.’ I started to imagine the different points of view that each one has of the other and thought it would be a good idea for a film.”

“Pachamama,” which had its world premiere at the Animation Is Film Festival last October, follows the adventures of a 10-year-old boy who wants to become a shaman. He goes on an adventure with his friend and her pet llama to retrieve a small golden statue confiscated from their village by an Incan overlord. The title, “Pachamama,” refers to an earth-mother goddess worshiped by the indigenous people of the Andes, and the film has an ecological theme that resonates strongly today.

Netflix picked up the film in February. The Cesar Award-nominated movie was influenced by the work of Antin’s anthropologist wife, who was doing social work in Argentina at the time with indigenous communities. Antin had the opportunity to talk with community leaders and shamans. “That’s when I really fell in love with this culture of Pachamama, how they worship the earth. They are in gratitude and in love with the earth and it’s so simple,” he says.

“And I thought it’s two points of view of the same thing: Europeans coming from Spain, from Europe, from England, France also, and seeing the earth as a resource of richness and gold, and these people that just see it as something to worship.”

Antin recalls a woman who was at an early screening of the film who told him that she understood why it took so long to get “Pachamama” made. “She said people weren’t prepared for this film back then,” he says. “I said, ‘That’s right, because 14 years ago, it wasn’t a thing that people talked about. It wasn’t in the media with people saying we have to save the planet.’ I guess it comes at the right moment now.”

It’s a message that Antin is glad to see go out to a global audience.

“Since the moment I knew that Netflix was interested in the film, I was thrilled because I believe this film has to be seen and because I want this message to be carried worldwide,” Antin says. “Netflix took the film and is putting in a lot of work, dubbing it in 20 languages. It’s amazing for an independent film to have a release that size.”

“Pachamama” is produced by Didier Brunner, who has backed a number of notable international animated films, including “The Old Lady and the Pigeons,” “Kirikou and the Sorceress,” “The Triplets of Belleville,” “The Secret of Kells” and “Ernest and Celestine.” With Brunner’s backing, the film went into production in 2015.

With “Pachamama” about to make its global debut, Antin is working on his next project, writing a script along the same lines as “Pachamama,” but set in the Amazon.