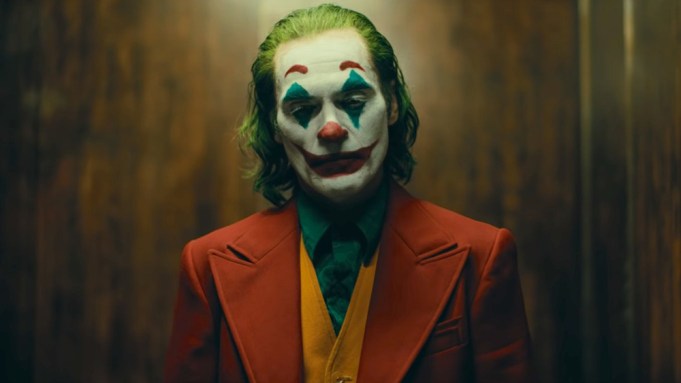 Smiling may be the theme of the first trailer for Todd Phillips’ “Joker,” yet it’s anything but smile-inducing.

The disturbing teaser, set to Jimmy Durante’s “Smile,” was released on Wednesday and shows Joaquin Phoenix’s character’s transformation from a momma’s boy to the Clown Prince of Crime as it gets “crazier out there.”

“I used to think that my life was a tragedy,” Arthur says. “But now I realize … it’s a comedy.”

“My mother always tells me to smile and put on a happy face,” he tells his therapist as he’s shown giving his mom a bath.

“She told me I had a purpose to bring laugher and joy to the world,” he adds as his character is being terrorized and assaulted while dressed like a clown and working as a sign spinner on the street.

The failed stand-up comic soon resorts to a life of crime, shown running away from some kind of attack on the subway.

Footage from the film debuted during Warner Bros.’ presentation at CinemaCon on Tuesday evening. “It’s a tragedy,” Phillips told exhibitors at the annual Las Vegas trade show. “I don’t have a lot to say about the film because it’s still taking shape. And I want it to be a surprise.”