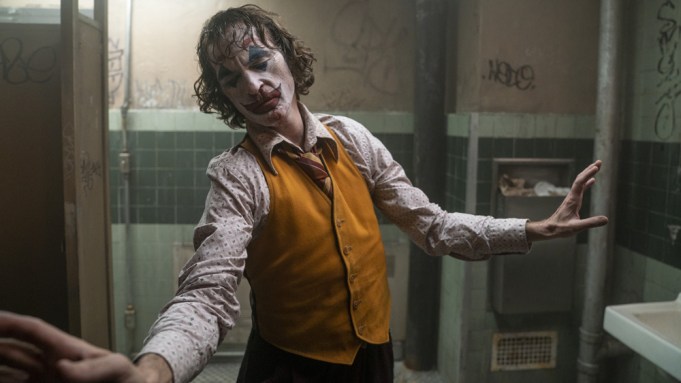 In weeks leading up to its release, Joaquin Phoenix’s “Joker” has inspired waves of stories and streams of tweets criticizing the R-rated comic-book adaptation for glamorizing a mass killer. Warner Bros., the studio behind the grisly origin story, is clearly in crisis mode, banning press from the red carpets at the film’s premieres, as they deal with outrage from families of the survivors of the Aurora movie theater shooting.

However, it doesn’t seem like the mounting controversy will deter most audiences from seeing Batman’s chief antagonist on the big screen. “Joker” is still on track for a massive debut and could earn $80 million to $95 million from 4,300 North American theaters.

Those estimates haven’t wavered much in the three weeks since projections first appeared on tracking services, though some bullish box office prognosticators believe “Joker” could even hit the coveted $100 million mark. Warner Bros. is anticipating a slightly smaller launch that’s closer to $75 million to $80 million given the film’s unconventional subject matter. Should ticket sales reach the higher end of that range, “Joker” could set a new record debut for the month of October, a benchmark currently held by Sony’s 2018 superhero thriller “Venom” ($80 million). “Joker” will also benefit as this weekend’s only new nationwide release, and it’s safe to say holdovers like “Abominable” and “Downton Abbey” won’t be vying for the same crowds.

Jeff Bock, a box office analyst with Exhibitor Relations, argues that the influx of think pieces surrounding the film, both good and bad, has only increased awareness and made moviegoers even more eager to see “Joker.”

“The old adage that all news is good news is usually true for films,” Bock said. “All this talk has ramped it up in people’s minds. That’s positive for the box office, whether you agree with where [the controversy] is stemming from.”

Beyond controversy for its grim subject matter, “Joker” has elicited concerns that its portrayal of a deranged assassin could inspire violence. Theater owners are taking precautionary measures, including outlawing costumes and face masks in some venues. The exhibition industry started to make some of these moves after the 2012 mass shooting in Aurora, Colo., at a midnight screening of “The Dark Knight Rises” left 12 people dead and 70 injured.

Bock attests that these kind of concerns have been “blown out of proportion,” adding that worried moviegoers could see earlier screenings or attend matinees. “There are definitely ways, if you do have fears, to alleviate them a little,” he said.

Todd Phillips directed “Joker,” a dark look at an aspiring stand-up comedian who descends into madness as his career and life begin to spiral out of control. Warner Bros. reportedly spent $55 million in production costs, a figure that don’t include costly marketing or distribution fees. The cast also includes Robert De Niro, Zazie Beetz and Marc Maron. Village Roadshow co-produced and co-financed the film.

“Joker” comes at a crucial time for Warner Bros. Outside of “It: Chapter Two,” recent films like “The Goldfinch,” “The Kitchen” and “Blinded by the Light” have fallen flat. The studio’s upcoming fall and winter slates include Edward Norton’s “Motherless Brooklyn,” the Stephen King adaptation “Doctor Sleep” and Michael B. Jordan’s legal drama “Just Mercy.”

While “Joker” is not a traditional superhero movie and could polarize audiences who are looking for something more in line with “Aquaman” or “Shazam,” the notoriety of the Clown Prince of Crime may appeal beyond just fanboys and fangirls. To compare, (albeit less disturbing) R-rated comic-book fare like “Logan” with Hugh Jackman or Ryan Reynolds’ “Deadpool” launched with $88 million and $123 million, respectively.

“It’s subversive and a little different. We’ve never seen Joker in an R-rated movie,” Bock said. “That’s a big deal for the most well-known villain in the comic-book universe.”