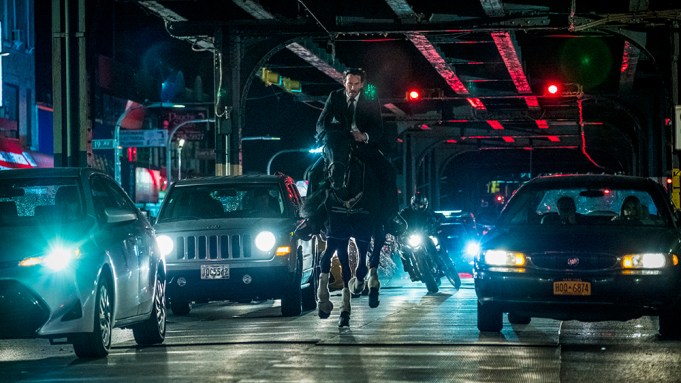 Liosngate’s third installment of the Keanu Reeves action franchise has been forecast to open between $30 million and $35 million at 3,850 domestic sites. That may be enough to top the fourth weekend of Disney-Marvel’s megahit “Avengers: Endgame.” The first “John Wick” debuted with $14.4 million and 2017’s “John Wick: Chapter Two” launched with $30.4 million.

In addition to opening wide in North America, the movie will also debut in 65 international markets day-and-date, including Australia, Brazil, Russia, Italy, Mexico, Scandinavia and the U.K.

“Avengers: Endgame” could collect around $27 million if it sees a decline similar to its past two outings. Ticket sales have dropped 58% each weekend following its historic $357 million launch. Should “Avengers: Endgame” remain victorious in North America, it will be the first film since “Black Panther” to retain the top spot for four consecutive weeks.

“Avengers: Endgame” is currently the third-highest-grossing movie of all time at the domestic box office, with $738 million in 20 days, behind “Avatar” ($760 million) and “Star Wars: The Force Awakens” ($936 million). It’s still the second-biggest film ever globally with $2.48 billion, trailing behind “Avatar’s” $2.78 billion.

Warner Bros. is launching “The Sun Is Also a Star,” a teen drama based on Nicola Yoon’s novel. It’s anticipated to make $6 million to $12 million from 2,073 locations. “Grown-ish” actress Yara Shahidi stars as a brainy student who forms a relationship with a charming exchange student (“Riverdale’s” Charles Melton), as her family faces deportation.

Despite the massive numbers delivered by “Endgame,” the domestic box office has dropped 9% from last year, hitting $3.95 billion as of May 15, according to Comscore.

“As Lionsgate’s ‘John Wick: Chapter 3 – Parabellum’ blasts its way into theatres, the film promises to take a huge bite out the box office as the well-reviewed and much-loved-by-fans franchise looks to continue the Wick magic that has kept audiences spellbound since the first film made its debut back in 2014,” said Paul Dergarabedian, senior media analyst Comscore. “It will take some heavy lifting in the coming weeks by a solid slate of notable and diverse newcomers to take us into June with less of a box office gloom cast over the industry.”