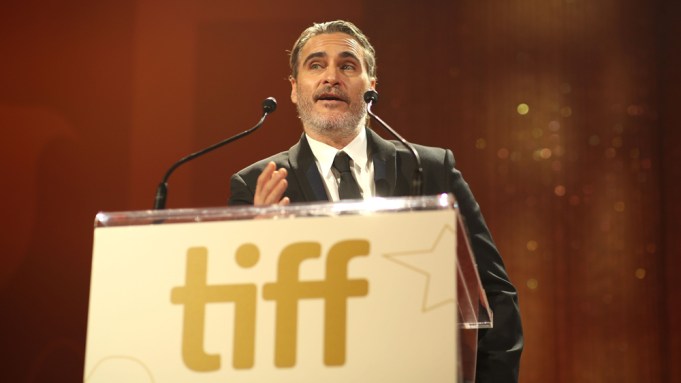 Joaquin Phoenix has three Academy Award nominations, four Golden Globe nominations (and one win) and a lead role in another film that’s already getting Oscar buzz, but in an emotional speech Monday night, the “Joker” actor made it clear that none of it would have been possible without his late brother River Phoenix.

“When I was 15 or 16 my brother River [Phoenix] came home from work and he had a VHS copy of a movie called ‘Raging Bull’ and he sat me down and made me watch it. And the next day he woke me up, and he made me watch it again. And he said, ‘You’re going to start acting again, this is what you’re going to do,’” Phoenix said at the Toronto International Film Festival Tribute Gala. “He didn’t ask me, he told me. And I am indebted to him for that because acting has given me such an incredible life.”

Phoenix was one of two actors presented with the TIFF Tribute Actor Award, following an introduction from fellow actor Willem Dafoe — which Phoenix also interrupted with a surprise appearance.

“You tell me if any of this is bullsh—” Dafoe said to Phoenix, before continuing his speech with a particularly pertinent message: “The point is he’s always surprising us, and himself.”

Phoenix’s own speech was much more emotional, detailing a number of people who he credited with helping him become the actor he is today.

“I feel overwhelmed with emotion, because I’m just thinking about all the people that had such a profound influence on me,” Phoenix said. “When I was watching those clips, I thought about my family. My sisters Rain and Liberty and Summer, who are still my bests friends.”

He also thanked his father, praising him for instilling a strong work ethic within himself — although “Joker” director Todd Phillips might disagree, he added — and his mother for being “a constant source of inspiration.” “Everything I do is for her,” he said.

Phoenix closed his speech in what appeared to be a reference to his current significant other Rooney Mara, who starred in “The Girl with the Dragon Tattoo” and who was also in attendance for the evening.

“One last thing — somewhere here, I don’t know where, is a filthy dragon, and I want to rip its wings off and fasten a blanket and sleep with it forever,” Phoenix concluded “I love you. Thank you.”

Meg Zukin contributed to this report.