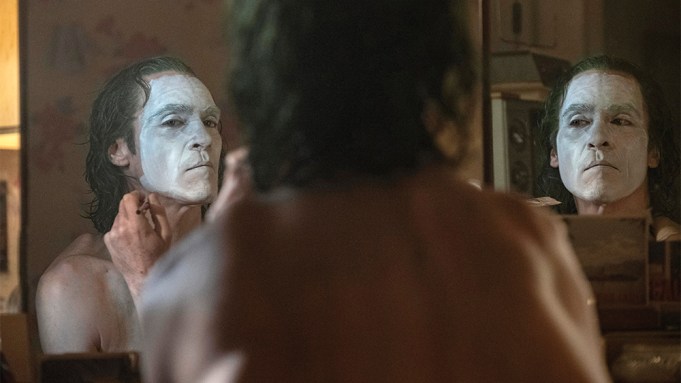 There was never a doubt that “Joker” would earn big bucks, but awards season recognition remains an open question.

As soon as the first trailer dropped in April, a chorus of praise was heaped upon Phoenix. The clip may only have been two minutes and 24 seconds long, but the glimpse of the actor as the clown-faced killer with a psycho laugh was met with Insta-predictions that Phoenix would secure his fourth Oscar nomination.

Since then, Warner Bros. staged the film’s world premiere in Venice, where it received an eight-minute standing ovation and picked up the Golden Lion. A few days later, the North American debut at the Toronto Film Festival earned Phoenix similar accolades.

The overall consensus seemed to be that even if the film was too dark and violent to truly enjoy, Phoenix’s performance alone was worthy of Oscar recognition.

However, controversy soon engulfed the movie: A group of family members and friends of victims of the mass shooting at an Aurora, Colo., movie theater during a “Dark Knight Rises” screening in 2012 wrote to Warner Bros., requesting that the studio counter the gruesome “Joker” brutality by donating to groups that help victims of gun violence. The group also asked the studio not to support political candidates who accept money from the NRA. In response, Warner Bros. issued a statement condemning real-world violence while also insisting it does not consider Joker a hero.

The studio quickly sheltered Phillips and his cast from the media when it turned the movie’s Los Angeles red carpet premiere into a photo-only event and did the same for its New York Film Festival screening.

Just days before opening weekend, AMC Theatres and Landmark Theatres announced the ban of costumes and masks during “Joker” screenings. The Los Angeles Police Dept. declared it would increase its visibility around cinemas during opening weekend. In New York City, a young man was escorted out of a screening in Times Square when he began applauding during on-screen murders.

How any of this affects the awards season prospects for “Joker” is yet to be seen, but the film is going to be a tough sell to Academy voters.

First, no matter how much Phillips and company rightly insist it’s not a traditional superhero movie, it was born of the DC Comics universe. Superhero movies have had very little success at the Oscars. The first time a live-action superhero film earned a best picture nomination was last year, when Ryan Coogler’s “The Black Panther” roared onto the scene. Even so, the film failed to pick up any acting noms.

The only superhero acting nomination in Oscar history went to Heath Ledger, who won posthumously for his role as the Joker in 2008’s “The Dark Knight.”

As for violent films, there have been Oscar noms as well as some wins. Stanley Kubrick’s “A Clockwork Orange” earned a best picture nom in 1972, as did “Deliverance” the following year. “Taxi Driver,” Martin Scorsese’s classic New York drama about antihero Travis Bickle, which Phillips says was a major inspiration for “Joker,” was nominated for best picture in 1977. Jonathan Demme’s “The Silence of the Lambs” not only grossed more than $272 million worldwide against its $19 million budget but also took home five Oscars in 1992 for best pic, director, actor (Anthony Hopkins), actress (Jodie Foster) and adapted screenplay (Ted Tally).

But that was then, and this is 2019. Mass shootings are now far-too-frequent occurrences, and the gun control debate continues to be a dominant political talking point. Active-shooter drills are part of many school curricula.

Almost all of the Academy voters I’ve spoken with praise Phoenix’s performance. “He’s brilliant,” one says. As the lights went up after the New York Film Festival premiere, I heard more praise than disapproval.

At the same time, voters appear to be resistant to rewarding the actor. It’s not because they don’t think his work is worthy; they just don’t like the idea that their vote could come off like an endorsement of violence.

Also, look at his competition: Would voters actually choose a homicidal madman over Adam Driver pulling on their heartstrings in “Marriage Story” by singing “Being Alive”? Or how about Leonardo DiCaprio playing a Hollywood star in “Once Upon a Time … in Hollywood”?

Even Adam Sandler may have a better shot than Phoenix. Sandler’s gambling-addict con man in “Uncut Gems” may not have many, if any, redeeming values, but the Safdie brothers’ dark comedy leaves audiences laughing without feeling guilty or uneasy about it.

During a panel discussion after the NYFF premiere, Phillips argued that his film’s depiction of real-world violence is more “responsible” than the “cartoon element of violence that we’ve become so immune to.”

He also said he believes the controversy wouldn’t “hurt the movie.” He added, “It probably has helped, and it’s good to have people talking.”

Talking may lead to stronger ticket sales, but it’s that same talking that could be the film’s undoing at the Oscars.