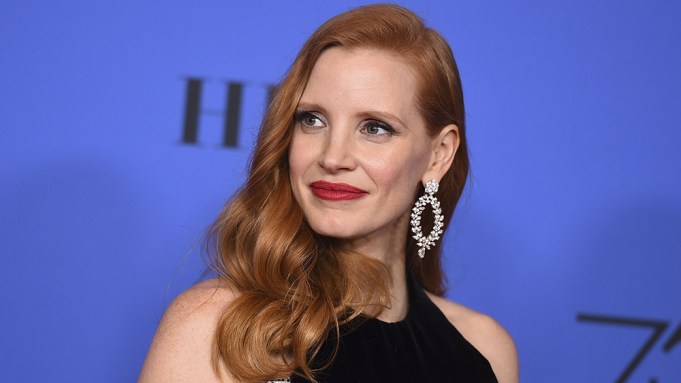 Jessica Chastain is a prankster.

When I sat down with her and her “It: Chapter Two” co-star Sophia Lillis (Chastain plays adult Beverly Marsh, while Lillis reprises her role as the Loser’s Club’s lone female member) for this week’s “The Big Ticket” podcast, Chastain warned me that there was someone under the table who was going to try to scare me during the interview.

I will admit I was on edge the entire time we chatted. But then, as we wrapped things up, the Oscar nominee smiled. “There’s no one under the table.”

We all had a good laugh. And it wasn’t the only laugh of the afternoon.

Just try asking about the gallons of fake blood used in the movie. “It was really gross,” Chastain said. “It was slimy.” She paused, though, because she said didn’t want to compare it to something that may not be suitable for Lillis’ young ears.

“They used homemade lube for it,” Lillis interjected.

Jessica smiled again: “That’s exactly what it was like: swimming in a vat of lube.”

It was a tougher shoot than Chastain had initially imagined because director Andy Muschietti insisted on using practical effects rather than CGI whenever possible. “I was exhausted,” Chastain said. “I was sick so much. At one point, I kind of cut open the front of my shin. I was super sick the day we filmed the [water-filled] quarry.”

The shoot probably won’t be as messy on her next film, a biopic about Tammy Faye Bakker, the colorful televangelist who ran a worldwide ministry alongside her husband, Jim Bakker, before it crumbled in the late 1980s amid sex, drug and financial scandals.

Chastain stars as Tammy Faye opposite Andrew Garfield as her husband.

The film will mark Chastain’s big-screen singing debut when she belts out Tammy Faye’s signature gospel tunes, and she’s already completed the pre-records.

“I did seven songs,” Chastain revealed. “I worked with Dave Cobb, who’s the producer who did the ‘A Star Is Born’ [soundtrack]. That was super scary.”

The film is based on “The Eyes of Tammy Faye,” Fenton Bailey and Randy Barbato’s 2000 documentary that was narrated by RuPaul. “I got the rights to play her in 2012 after ‘Zero Dark Thirty’ came out,” Chastain said. “I re-watched the documentary when it was on TV and I was like, ‘Why hasn’t anyone done a movie about her?’ So, I bought the rights for, I think it was like $5,000 [when] I didn’t have a production company or anything and then worked forever to try to get it to happen and now it’s happening.”

You can listen to the entire episode of “The Big Ticket” with guests Jessica Chastain, Sophia Lillis and their director Andy Muschietti below. You can also hear it at iHeartRadio or wherever you find your favorite podcasts.