Jennifer Lopez and Constance Wu on Why ‘Hustlers’ Is an Empowering, Feminist Story 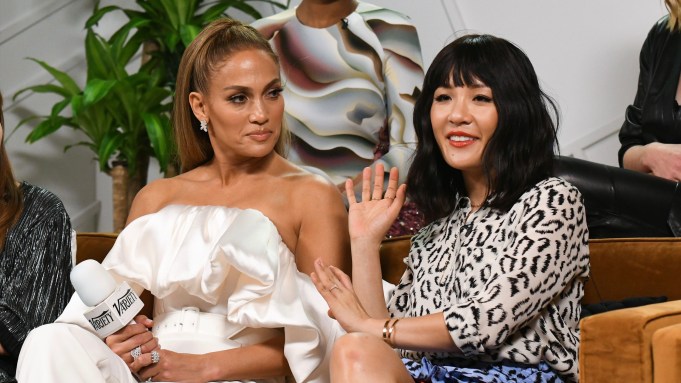 When Jennifer Lopez read the script for “Hustlers,” she felt an immediate connection to Ramona, the most powerful stripper at a New York club during the 2008 financial crisis.

But she also liked that the screenplay for “Hustlers,” written by Lorene Scafaria, touched on much deeper themes. “It’s about the people, but it’s also about something bigger,” Lopez said. “It’s a universal story about life and greed and desperation and what people do.”

STX Entertainment’s “Hustlers,” which opens in theaters on Sept. 13, premiered at the Toronto International Film Festival on Saturday night, to wildly enthusiastic reviews. The following day, the film’s cast – Lopez, Constance Wu, Keke Palmer and Julia Stiles – and Scafaria, who also directed the movie, sat down for an interview at the Variety Studio presented by AT&T.

When asked if they considered “Hustlers” a feminist film, Wu responded quickly. “I think it’s a feminist story,” she said. “It depends on how you define feminism, which I think is just equality. One of the reasons I think it’s especially feminist is because we’re taking women who have previously been judged and shamed by society and getting to know them as people instead of as objects. I think that is the true spirit of feminism is humanity. And that’s what our movie goes after.”

Scafaria recalled how when she pitched “Hustlers,” based on a New York magazine article about strippers at Scores, most studio executives were uncomfortable that they women were such tough anti-heroines. “When pitching an idea like this, it’s not a black-and-white story,” Scafaria said. “I think it’s hard to get any movie made nowadays. It’s especially hard to get movies made about women doing questionable things.”

Did she really believe that? “I do,” Lopez explained, as she pointed to the economics of telling original stories that weren’t big blockbusters or comic-book sequels. “And when you have women characters at the front of it, it’s a whole another battle. And you go, ‘Yeah it’s all starring women. There’s really no male characters in it.’”

VIDEO: Constance Wu on the Feminism of “Hustlers”

Scafaria said that she was intent on telling a story that was big in scope. “It was fun telling an epic story about women,” she said. “Yes, we get a lot of smaller stories. I think people assume our lives are small stories. I think that contributes to the amount of female speaking roles in movies like this. In the last 20 years, there hasn’t been an Academy Award winning movie with women talking to each other, except for ‘Chicago,’ where they are singing to each other.”

Lopez is generating Oscar buzz for her role as Ramona. It’s not clear if she’ll be campaigned in the lead or supporting category yet. But unbelievably, no Latina has ever won the Oscar for best actress. (Only four have been nominated in the history of the Academy Awards: Fernanda Montenegro, Salma Hayek, Catalina Sandino Moreno and Yalitza Aparicio, earlier this year, for “Roma.”)

“Listen, you work so hard for so many years, it’s nice to be in the conversation for sure,” Lopez said when asked about the awards buzz. “I’m so proud of what Lorene is done. I think she deserves to be in that conversation too.”

As for playing Ramona, Lopez took pole-dancing classes for authenticity. She insisted on a scene, at the beginning of the movie, where her character performs to Fiona Apple’s “Criminal.”

“It’s really tough,” Lopez said about the process. “That steel pole is unforgiving and you just have to figure it out. I did a crash course. Cardi [B], when I spoke to her about doing the movie, I told her I’m just starting to how to learn how to pole dance. I said, ‘It’s so hard. I’m bruised everywhere.’ She was like, ‘Oh yeah. I’m really good at it now, but it took me years to learn.’ Even my teacher said, ‘This is normal.’ I said, ‘This chafing is normal!?’ I knew I had to conquer three or four minutes of the song and that’s what we did. It’s difficult. It’s funny walking in someone else’s shoes—you never know what it’s like. Until it’s you.”