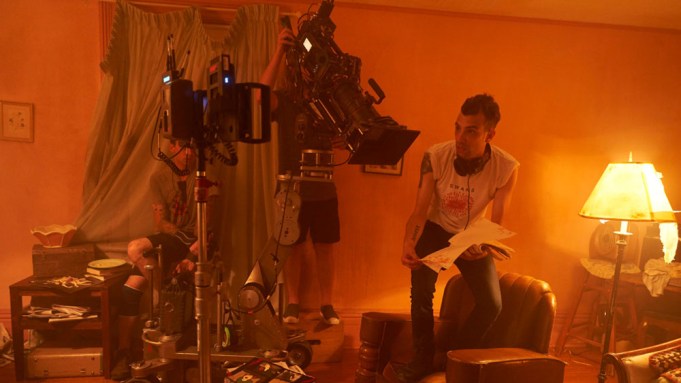 Jay Baruchel has played a role for every consumer age bracket: The Canadian actor’s lengthy resume includes everything, from voicing an awkward teen in Dreamworks’ hit animated franchise “How to Train Your Dragon” to playing a 20-something looking for love with surreal consequences in “Man Seeking Woman” to, well, himself in “This Is the End” in 2013, alongside longtime friend and sometimes-collaborator Seth Rogen.

For his latest film, “Random Acts of Violence,” premiering at Fantastic Fest on Sept. 19, he took up not only acting but also screenwriting and directorial duties, his second turn at the helm — In 2017, Baruchel directed “Goon: Last of the Enforcers,” the sequel to hockey comedy “Goon,” both of which he co-wrote and acted in.

“Random” is an indie horror film, made on a small budget, and centers on a writer (Jesse Williams) intent on finishing his comic book. While on a road trip with his best friend (Baruchel), girlfriend and assistant, however, the group begins to notice eerie parallels between his work and a string of murders; Jordana Brewster and Niamh Wilson co-star. Watch an exclusive clip of the film above.

Baruchel will next star in Fox’s holiday series “A Moody Christmas” with Denis Leary and Elizabeth Perkins. Variety caught up with Baruchel via phone for an exclusive chat with the multi-hyphenate multi-tasker as he was prepping to leave for Europe for his wedding.

How did you come up with this story? How did this come about?

My writing partner Jesse Chabot and I had been given this comic book, “Random Acts of Violence,” eight years ago. We met the people that owned the rights to the book because we were meeting with them about something else that we liked.

At the start of it, it was a straight-up writing gig. So, we wrote the very first treatment eight years ago, but at a certain point we both just kind of really fell head over heels with the subject matter that we were writing about. I realized that I cared about this thing so much, that I wanted to direct it, with everything that that entails, all of the stresses, the highs and the lows.

It was actually at the urging of a friend of mine named Jason Eisener, who directed “Hobo With A Shotgun” and edited “Goon 2.” He was the one who said, “This is your voice, your spirit is all over this thing. You should be doing it.”

So, it takes you seven, eight years to make this. When did you finally start shooting and where?

More or less this time last year. We did it all within two hours of Toronto, a bunch of small towns roughly outside of here and a place called Hamilton. We were all over southern Ontario, technically 20, but really 19 days last year. We just hauled ass and went as hard as we could.

You’ve been in big studio features where this isn’t even a question, but cobbling together a budget for a film like this, how did you do it? What was that experience like compared to, say, dropping by Dreamworks and popping into the voiceover booth?

[Laughing] It’s hilarious. It’s not even light years, it’s parsecs away. They couldn’t possibly be more different. The processes are the same in that they’re both movies, but that’s about it. It’s funny, I’ll be flown to Norway to promote “How to Train Your Dragon 3” with all these influencers and s— that they’ve flown over there, with all the fringe benefits of doing a Dreamworks thing. At the same time, I’m just furiously checking my phone for emails about whether or not we have the money to get one more f—ing VFX shot in my movie.

We had other incarnations earlier, a few different times, a few different production companies in the States were involved for a minute, but we always got to some kind of creative loggerhead. It wasn’t worth it to either Jesse or me to make it unless we could make it the way that we wanted to make it. Once Elevation Pictures in Toronto got involved, it kind of really lit a fire under the arse of the whole thing. Pretty shortly after that, we found our French financiers. All of a sudden, I was meeting actors, and we were becoming a real movie. Eventually, we had a f—ing production office with an email address. All the real s—.

It’s not your first time stepping into the role of director. How do you think you’ve evolved as a filmmaker up until this point?

I would like to think that I got more at ease. This is not to say that I was a wallflower on the set of “Goon 2.” I was not. But on the inside I was in the process of giving myself an ulcer and all sorts of fun s—.

“Goon 2” was the first time being in this business that I saw something from the embryo to the finished product. It beats the s— out of you. I like to think that this time, knowing what to expect and knowing what I was going to be putting my body and my mind through, I was able to just sort of strangely relax a bit more, even though we had a quarter of the money and less than half as many shooting days to make this film. And the other thing was, even though we were a smaller movie than even “Goon 2,” nobody was really breathing down our necks in any way.

What is the logline for the film?

[Laughs] I say, “People have a hard time describing it,” and I can hear the muted fleshy sounds of all of my producers’ a–holes clenching up. That’s a horrible bit of imagery. I’m sorry.

In terms of a logline, that’s a hard one. I think it scratches a bunch of different itches. For the people who want a good horror flick with some good scares, I think we do that. But to me, it’s a horror story about the creative process, about what can happen when an artist has his head all the way up his arse and to the detriment of his or her immediate orbit. Watch any rock documentary or read any rock biography — these are all guys that are important to the world but nine times out of 10, really crappy to the people they’re close with.

We [also] had some pretty strong opinions about the trivialization of violence against women. This is not to say that you can’t show said thing, but you can’t show said thing in a trivial way where people are high-fiving each other. We realized something: None of us could name a single character in any of the “Jason” movies other than Jason. There’s the guy with red hair, the guy with freckles, or the super horny one or whatever, but I couldn’t name any of the characters. I couldn’t really describe anything about them. It tells me that none of them are the hero, that Jason’s the hero [and] what it boils down to is various sadism. I had questions, and I was interested in the totality, the effect of that and the responsibility of that.

Because this is also about an artist’s “unfinished story” and the artistic process, it seems like it was a “meta” thing for you.

How much of your own experience are you bringing into this? Did it make you mine and evaluate your own artistic process?

Absolutely. Our main character — he’s many things but some of that is a distillation of what I see in myself that I’m not a huge fan of. This is not to say that I think I’m a wanker or our main guy is a huge piece of s— full stop.

I’ve been on sets since 1995, and whether or not everything I’ve done can be considered art is a conversation for another time. But this is all to say that I have been just mindful or pensive about earnestness and being genuine since I was a kid. I have never wanted my personal life to really suffer at the cost of any of the other s—. For me, it’s always been most important to be a good son, husband or boyfriend, brother and friend first. But I also saw people who didn’t have that micro-chip in their head. Creating was all that mattered. It’s about finding that balance ‘cause to me, if a life without art isn’t worth living, I would agree and follow up by saying art, without a life around it, is not worth creating.

Exactly. As someone who has worked on both ends of the spectrum, what are your thoughts about this state of cinema?

That’s so funny because I was just talking about this exact subject about three hours ago at lunch with my friends. We were, at first, lamenting that. But then this debate class devil’s advocate thing took over which was is that actually the case? Do we have less movies to consume than we did? When I was a kid, there was the junkie-kicked-the-heroin movie, but there was also “Armageddon” and there was also “The Bone Collector” and “Notting Hill.” There was a movie in every size for every person’s interest, and everybody was served, and we don’t have that anymore.

[So the argument is that] we’ve built up this dam and blocked all the movies that aren’t either tiny or massive, so those don’t exist anymore. Well, I think they just got kind of channeled into television and streaming. I think the equivalent of the “Notting Hills” or the “Bone Collectors” or whatever — not that “Bone Collector” is a favorite movie to watch, I’m just using it as an example. I don’t know why I keep mentioning it [laughs]. The modern equivalent, like “Mindhunter,” that’s on streaming. Now is that good or bad? That I don’t know. I do miss having more movies. I definitely know that. I was a video store rat. I just rented everything from random foreign art films to whatever B-movie Roddy Piper was in. I found a home in my mind and my heart for all of it, so I miss some of that variety. I also know that I picked a hell of a time to start making movies.

I think at the end of the day — and it’s going to sound like a platitude — if you make something awesome or make something at least truthful, someone’s gonna find it and it’s going to mean something to them. This is not what my producers want to hear, but some of the movies that mean the most to me would be considered somewhat obscure or deep cuts to a lot of people. And that’s not me trying to be a film nerd asshole. I’m being honest. I also can’t worry about that s—. All I have to give a s— about is am I making something worth making? Is it as truthful as I could possibly make it? Anything else is up to other people.

Any chance you’ll be collaborating with Seth Rogen again down the line?

There’s nothing specific in the near future, but that’s somebody I’ve known 20 years, and I really enjoy creating with him. Lord knows we did our time as dirty 19-years-olds in a smoky apartment, just watching whatever, just inhaling movies. I really enjoy getting to do stuff with him and Evan [Goldberg]. But we also are kind of each doing our own thing. They’ve got a lot of s— going down there, I’m building what I’m building up here. But yeah, it would be wicked. We’ll see.