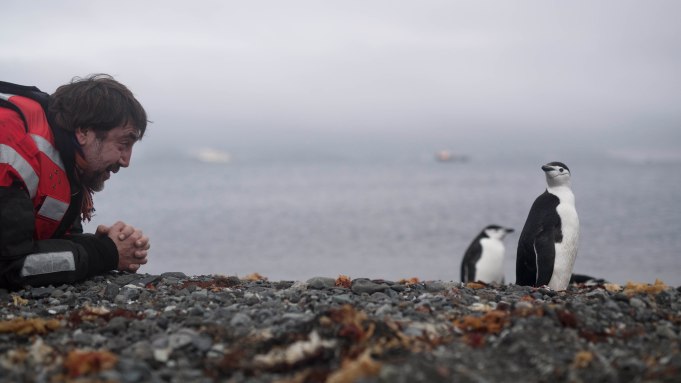 On Aug. 19, Bardem, along with Greenpeace, addressed delegates at the United Nations in New York to urge governments to agree to a strong Global Ocean Treaty. Creating ocean sanctuaries across the planet, this, or so activists hope, would put a third of the seas off-limits to fishing, mining, drilling and other destructive industries.

The trailer for “Sanctuary” began the conference.

The conference’s results are as yet unknown. Written by Alvaro Longoria and Carlos Bardem and produced by Longoria and the Bardem brothers and shot over January to October 2018, “Sanctuary” chronicles one crucial campaign building towards the call for a Global Ocean Treaty, the push to put pressure on governments to create the largest marine sanctuary in the Antarctic Ocean.

More sophisticated than most eco-docs, “Sanctuary” also breaks down  how that might be achieved. “If we are going to change politics, we have to create noise,” says Greenpeace Norway’s Frida Bengtsson.

So Greenpeace flew in Javier and Carlos Bardem to their ship in the Antarctic to make live Facebook relays and dive to the life spangled ocean floor. They then represent the campaign to key governments: the trailer shows Bardem visiting Michael Gove when U.K. secretary if state for the environment.

“Sanctuary” is the story of the Greenpeace campaign, its strategy and some extraordinary step forwards for ocean protection. It also reveals Bardem as rarely seen before a camera, especially his sense of humor.

As the trailer suggests, he becomes the film’s fall-guy, struggling to just tie his boots, asking if he could down to the ocean bottom for five minutes to be told it takes 20 to get t the ocean floor. Variety talked to Bardem before his U.N. presentation:

“Sanctuary” looks to have a strong narrative thrust, announcing at its get go that it the story of a “mission” to creare the largest marine sanctuary in the Antarctic. But it’s also the story, if the film’s like the trailer, of Javier Bardem who struggles at first to put on a thermal suit but gradually becomes accustomed to his surroundings…

As a producer, I had my doubts about appearing on screen, which I finally do, as in “Sons of the Clouds.” What I like about about the documentary is the absolute inexperience with which we starting making it, in front and behind the camera as we, and the spectator with us, try to understand in a very basic way why it’s important to support those who do know what they’re saying and doing about these issues. It’s a learning curve for me and the spectator. Of course I want a habitable world for my children and grand-children. But I want to understand what the situation is now, and what we can do to change it.

You don’t talk much about your life in interviews. “Sanctuary” reveals quite a lot about the “real” Javier Bardem, I think….

Yes, it’s true. When you’re living on a boat for 10 days with other people, there’s really no place to hide. You’re there as you really are, for good and for bad. Alvaro [Longoria] shot hours and hours and hours. When he started to edit, the only thing I asked as a producer was that it should be an “advertorial.”

Like when you ask in a scene in the trailer if the mini-sub takes five minutes to get to the ocean floor and you’re told, no, it takes 20 minutes….

Yes, I’m like the viewer, who boards a ship and has to have everything explained to him…So it’s normal you seem vulnerable, or a fall guy. Also, humor’s vital in these situations. The people on the Greenpeace boat have been away from home for six months, sleep seven, six, five hours a day, are working the rest on projects, research, maintenance. They need a sense of humor.

“Politicians listen to people, we think that they don’t but we know that they do, Greenpeace’s Frida Bengtsson says in the trailer. “Sanctuary” would appear to show what leverage you and the documentary have with people and so with politicians, such as Michael Gove, glimpsed in the trailer.

The only thing I can bring to the table is a bit or a lot of media attention, not that’s it’s very great at all, to act as as a sounding board for many things….Many of the politicians gave me an appointment maybe because they were curious to know me, and to appear in the documentary, but also because they support the idea of ocean sanctuaries. I’m a little like someone who knocks on a door, and that door is opened and then behind me are people who dedicate their lives to this, and at meetings can talk about hugely important issue presenting researched, proven facts to a minister or government official. I just defend their wisdom.

The documentary is very concerned from very early to show, as Carlos Bardem puts it, how micro is macro, how the creation of an Antarctic Ocean Sanctuary isn’t just about that stretch of water, even if its four times the size of Germany.

There’s a Butterfly Effect. The Antarctic Ocean Sanctuary would have caused a precedent. Curiously, I think it might be easier to achieve a Global Ocean Treaty than just one sanctuary.

If you inhale three times to breath, the third time you’re inhaling air that comes from the oceans. The United Nations will take a decision soon after the presentation. We’re in the same situation as when last year our launch threw up a bit of plastic which must have floated there from Chile or Argentina. Governments should pay for scientific studies of how to replace plastic with biodegradable products. Greenpeace’s role is to encourage its supporters to come together and create governmental responsibilities.

When you get to see the Antarctic Ocean floor in the mini-submarine, which is shown in the trailer, and then return to the surface and the ship, when the submarine hatch is thrown back, you look very, very moved, and one suspects that spectators will be as well.

It was a privilege to go down in the submarine. But my God! I never thought there would be such life, such color  – coral, sponges, sting rays, jelly fish. When we came up again, I had to talk because that’s what I was there for, the camera was rolling, but yes, I was so, so moved. Also, I’d seen with my own eyes what people were talking about, why Greenpeace volunteers get up at 5 am to make three dives a day. I hope viewers feel what I felt. It’s important for people not just to know that these issues are important but to feel also that they’re important as well.