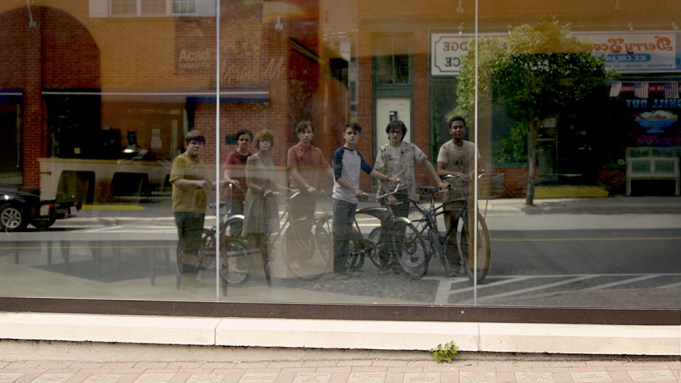 SPOILER ALERT: The following story contains details of the opening scene of “It: Chapter Two.”

Fans of Stephen King’s novel “It” will be familiar with the opening scene of “It: Chapter Two,” director Andy Muschietti’s follow-up to his first “It” installment in 2017.

A gay couple is walking home from a carnival in Derry, Maine when they are brutally attacked by a group of teens hurling slurs. During the beating, the attackers throw one of them from a bridge into a river. It’s a brutally realistic scene — that is, until Pennywise appears and drags the man out of the water and bites into his lifeless body, as his boyfriend looks on in terror.

While the deadly gay bashing is never addressed later in the film, it turns out the event occurs in King’s novel and was inspired by Charlie Howard, a real gay man who was killed by a group of teens in King’s hometown of Bangor, Maine in 1984.

Muschietti says including the scene was essential to the storytelling.

“It was very important to me because it is of relevance,” he tells Variety. “I probably wouldn’t have included it if it wasn’t in the book, but it was very important for Stephen King. When he wrote it, he was talking about the evil in the human community. He was talking about how dark humans can get in a small American town…For me, it was important to include it because it’s something that we’re still suffering. Hate crimes are still happening. No matter how evolved we think society is going, there seems to be a winding back, especially in this day and age where these old values seem to be emerging from the darkness.”

The man killed in the film, Adrian Mellon, is played by gay filmmaker Xavier Dolan with his boyfriend portrayed by Taylor Frey, who is also gay.

“The reason why I think Stephen King is the king of this genre is because he writes psychological horror,” Jessica Chastain, who plays the adult Beverly Marsh in the sequel, told Variety. “The monster usually is spawned from a human. It’s inside of us. Look at ‘Pet Cemetery.’ Look at ‘Misery.’ We can become our worst enemies sometimes. He wrote the novel ‘It’ because a hate crime was committed in his childhood town. That darkness, he wanted to explore and that’s the first scene in our film.”

Asked to further elaborate, Chastain said, “It’s going to be hard to talk about this without crying.”

She continued, “I think you need that scene because he writes about the darkness that’s under the surface. The dirt under the fingernails of these small towns or of mankind. That’s what ‘It’ represents. It’s the darkness of human behavior. I think it was important to see Adrian’s scene and not to change it from what it is in the novel because we’re living in a time right now where it is very much a part of our culture and part of our conversation and we haven’t moved past it. So, we can’t pretend that it doesn’t still exist because it’s part of our every day.”

The hate crime was not included in a 1990 miniseries adaptation of the novel.

You can hear the full interviews with Chastain and Muschietti on this week’s upcoming episode of “The Big Ticket,” Variety and iHeart’s film podcast, dropping at iHeartRadio or wherever you listen to your favorite podcasts on Thursday, Aug. 29.