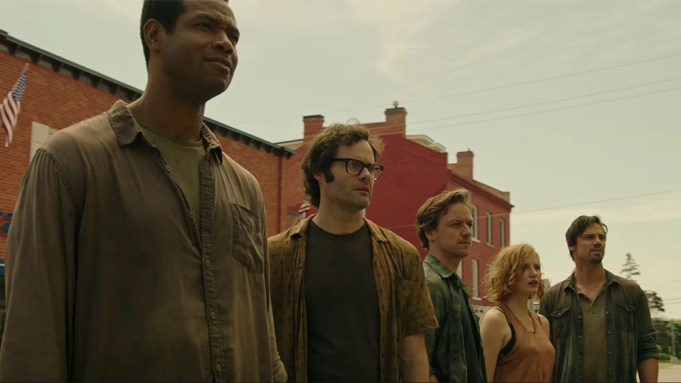 Pennywise and the Losers’ Club are back.

It’s been nearly three decades since the youngsters of Derry, Maine defeated the sewer-dwelling, shapeshifting demon known as Pennywise the Dancing Clown. Or so they thought. Warner Bros. and New Line unveiled new footage of “It: Chapter Two,” showcasing the band of misfits returning to their hometown 27 years later to take on the demonic force once again.

The trailer for the highly anticipated sequel to “It” begins with an adult Beverly Marsh (Jessica Chastain), returning to her childhood home, only to discover that an older lady now occupies her dad’s former house. She invites Beverly inside for tea and cookies.

“You know what they say about Derry. No one who dies here ever really dies,” the elderly woman tells Beverly before initiating a staring contest for the ages. “But tell me, how is it being back in Derry?”

On cue, the seemingly friendly woman is replaced with Pennywise and comes at Beverly with full force.

Later in the clip, the ghastly clown is seen floating through the air with sea of his signature red balloons. But his terror may end as the squad returns to the sewers to deal with the threat once and for all.

“We can do this,” James McAvoy’s Bill Denbrough promises. “But we have to stick together.”

Bill Skarsgard is reprising his role as Pennywise. Chastain will be joined by McAvoy and Bill Hader as the older version of the Losers’ Club members Beverly, Bill Denbrough and Richie Tozier. Their younger counterparts, played by Jaeden Martell, Sophia Lillis and Finn Wolfhard, will also reprise their roles in the sequel. Andy Muschietti will once again direct the Stephen King adaptation. “It” became a huge box office hit, earning over $700 million in ticket sales worldwide.