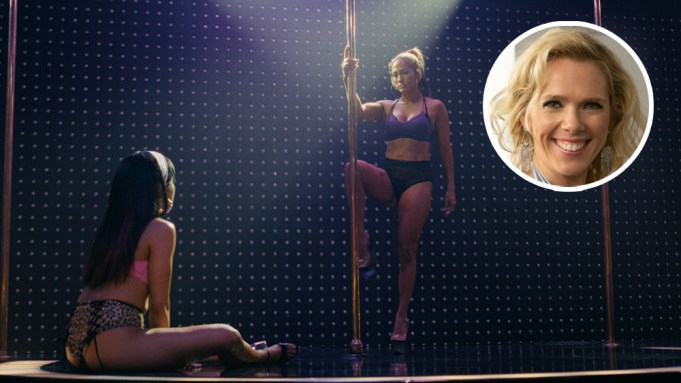 This adoration was not for stars Jennifer Lopez, Constance Wu or Keke Palmer, nor was it for the film’s acclaimed writer-director Lorene Scafaria. The woman was Jacqueline Frances, an unknown introduced by Scafaria as a cast member and “comfort consultant” on the project, which has ignited Oscar buzz for Lopez and is expected to fetch almost $30 million at the domestic box office this weekend.

Frances is a sex worker who goes by the handle Jacq the Stripper, and indeed served as a consultant on the STX film as a resource for both the actors and producers to combat what she says is a longstanding toxicity in our culture: “The representation of sex workers in mainstream media is trash.”

Scafaria and Frances devised the term “comfort consultant” as an offshoot of an intimacy coordinator, an increasingly popular role on film and TV sets that coaches and supervises actors through love scenes and other explicit acts surrounding the body. The job will become ubiquitous, many insiders predict, as just last Tuesday the Screen Actors Guild of America held a roundtable discussion with top intimacy coordinators to “develop, standardize and codify appropriate protocols for intimacy coordination on sets.”

“Hustlers” is a different story. The film does not feature a single sex act on-screen, nor does it present sex or the female body outside of the film’s specific lens — that of a commodity. The entrepreneurial strippers of “Hustlers” control this commodity, and they mean business.

“My involvement in this film was two-fold: doing my best work to make sure strippers felt seen and represented, and also making sure the actors felt comfortable representing them and doing this work. There’s this idea that strippers just have to show up and be sexy according to what someone else thinks sexy is. That’s not really how stripping is. It’s an expression of your own sexuality and people pay you for it,” Frances said.

Chief among the knowledge she shared was that stripping is a highly social transaction, especially in one-on-one dances or private room shows in clubs across the country. Lopez asked Frances what, if anything, she was supposed to say during a dance.

“You’re not sitting there dancing quietly for a guy for ten minutes, you’re talking to him. You’re making conversation and trying to keep the clock ticking,” she said. “You have to keep it fun and playful, so it was teaching the banter that keeps the money flowing.”

Frances said “Hustlers” represents a community desperate for an accurate portrayal of their emotional lives.

“Strippers are anxious about this movie. They want it to be good, because a lot of the movies about strippers have been really problematic and made things worse. A lot of the narratives are really sad or pathetic, they pathologize what brought them to do this. This movie doesn’t do that,” she says.

But it always comes back to the hustle. Frances said, on more than one occasion, Hollywood creatives have approached her looking for expertise without offering compensation — to “pick her brain.” She was paid a day rate as both an actor and consultant for the duration of the “Hustlers” production. She thinks other industries should take note.

“These are entrepreneurial women doing their best to survive. Sex workers are criminalized all the time. Banks won’t take our money if they find out we work at a strip club. PayPal will seize our assets if they find out we are [cam models] or strippers. The violence we face is from the media portraying us [like] we’re sad and destitute when we’re really just struggling to survive under capitalism,” she said.

“Hustlers” is in theaters nationwide.