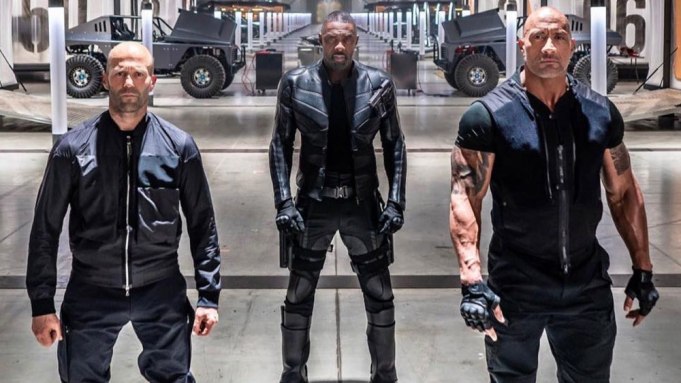 The action-packed first trailer for “Fast & Furious” spinoff “Hobbs & Shaw” has finally arrived, and it was worth the wait.

“I’m dealing with the future of the planet. I’m the necessary shock to the system. I am human evolutionary change — bulletproof, superhuman,” he says.

In addition to the usual car chases and high-flying acts characteristic of the franchise, the trailer also features a good deal of buddy comedy.

“The Crown’s” Vanessa Kirby, who plays Shaw’s sister Hattie — an MI5 agent — steals plenty of scenes from the titular heroes.

The ninth film in the franchise, “Hobbs & Shaw” follows “The Fate of the Furious,” in which a mysterious woman drew Dom (Vin Diesel) into the world of terrorism, forcing him to betray his friends.

Chris Morgan has returned to write the script, while David Leitch will direct.

Johnson announced the trailer’s imminent release on Wednesday, along with a teaser and a quote from his character: “I’m what ya call a nice cold can of whup ass.”

“I’m what ya call a nice cold can of whup ass” ~ Luke Hobbs
Get ready for our worldwide @HobbsAndShaw trailer debut on FRIDAY. #JasonStatham @IdrisElba & the kid stir up trouble & fun in the biggest showdown the Fast & Furious franchise has ever seen. #HobbsAndShaw #Boots2Asses pic.twitter.com/ZBfhiacKRC