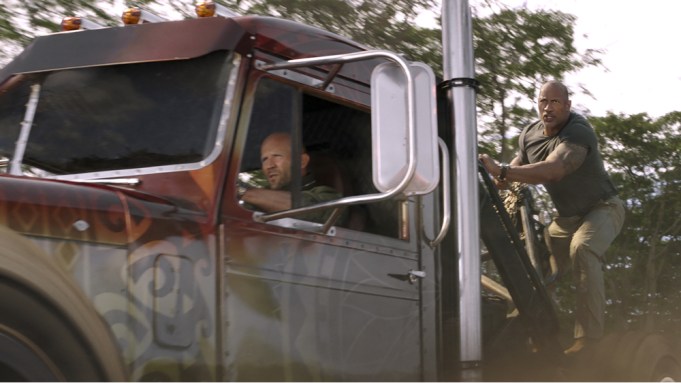 When the first trailer dropped in February, viewers were introduced to the genetically-enhanced villain Brixton, played by Idris Elba, as well as a newly cordial relationship between old enemies Luke Hobbs (Dwayne Johnson) and Deckard Shaw (Jason Statham), who are returning for the “Fast and Furious” franchise’s ninth film.

At the start of the trailer, Hobbs and Shaw knock out a group of gun-wielding baddies blockading a locked door in Chernobyl. The duo takes out each crew member with ease — so much ease that Hobbs yawns in the middle of fighting. After the fight fest, Hobbs and Shaw get access to a face-recognition lock by using the faces of their fallen enemies. The trailer sparks a laugh when Shaw repeatedly gets denied access because his victim’s face fails the test.

The trailer then transitions from Chernobyl to a square in London, where villainous foe Brixton threatens a deadly global attack via public telecast.

Brixton adds that Shaw’s sister (Hattie) — played by Vanessa Kirby (“The Crown”) — took a deadly virus from him and that it has the potential to “wipe out half the population, and [he] wants it back.”

“It’s my sister, family business,” Shaw says in response while arguing with Hobbs.

“When it’s the fate of the world, it becomes my business,” Hobbs replies.

Helen Mirren then makes an appearance from prison as Shaw’s mother, telling her son that the mission is “dodgy,” to which Shaw assures her that he has it covered.

The spinoff hits theaters on Aug. 2.