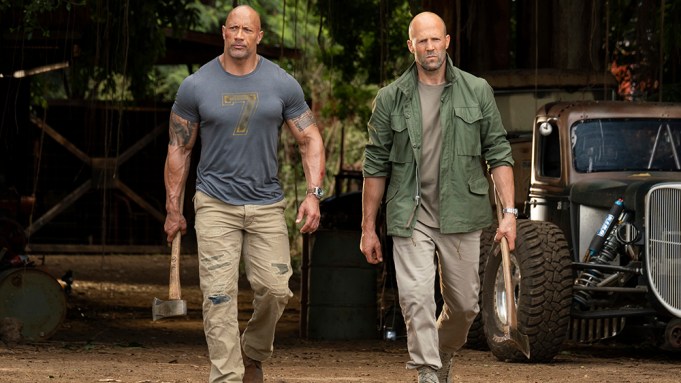 The action-laden tentpole, the first spinoff from the formidable Fast & Furious franchise, is opening at 4,253 sites and stars Dwayne Johnson as Luke Hobbs and Jason Statham as Deckard Shaw. The preview number is similar to the $6 million figure for “John Wick: Chapter 3,” which opened with $56 million domestically  on May 17-19 on its way to $169 million.

Forecasts see “Hobbs & Shaw” handily topping the domestic box office with about $60 million, with Disney’s third weekend of “The Lion King” in the $30 million to $40 million range. Quentin Tarantino’s “Once Upon a Time in Hollywood” should take the third slot at around $20 million following the director’s largest opening to date at $41 million for Sony.

“Hobbs & Shaw” is the ninth title in the Fast & Furious universe, which has generated $5.1 billion in worldwide grosses since its launch in 2001. The eighth installment in the franchise, “The Fate of the Furious,” debuted with $98.7 million domestically on April 14-16 on its way to a $226 million North American total. 2015’s “Furious 7” opened with a franchise-best $147 million and wound up with $353 million domestically.

“Hobbs & Shaw” is launching without franchise stalwart Vin Diesel in his signature Dominic Toretto role. Idris Elba plays the villain, a genetically enhanced anarchist, and Helen Mirren returns to portray the mother of Statham’s Shaw. David Leitch, known for his work on “Deadpool 2,” directed the film from a script by “Fast” vets Chris Morgan and Drew Pearce.

“Hobbs & Shaw” carries a respectable 71% score on Rotten Tomatoes and will launch in 63 markets this weekend including UK & Ireland, Germany, Russia, Mexico, Brazil, Australia, and Japan.

It’s arriving as domestic market continues to trail last year’s by 6.8% at $6.9 billion, according to Comscore. Paul Dergarabdian, senior media analyst with the tracking service, said the outlook is bright for the weekend.

“On-screen buddies abound as ‘Hobbs & Shaw’ join ‘The Lion King’s’ Timon and Pumbaaa and ‘Once Upon A Time In Hollywood’s’ Dalton and Booth over what will be a solid weekend to kick-off the final month of the summer of 2019.  Not to mention Peter Parker & Ned Leeds in ‘Spider-Man: Far From Home’ and Woody and Buzz Lightyear in ‘Toy Story 4,'” he said. “‘Hobbs & Shaw’ will count on the devoted Fast and Furious ‘ride or die’ fans around the world to race to the movie theatre to watch two of the most dynamic, appealing and charismatic actors/characters from the long-running action series.”