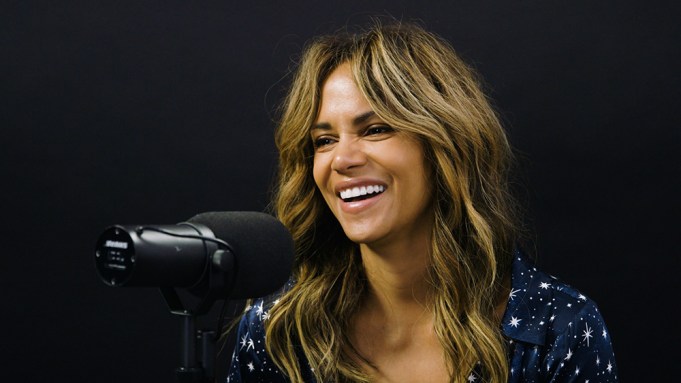 She’s such a fan, in fact, that she ended up in the third installment of the action franchise, “John Wick: Chapter 3 – Parabellum.”

“I get a phone call from my agent and my manager saying, ‘They’re doing a third installment of ‘John Wick.’ Did you ever see ‘John Wick’ 1 and 2?” Berry recalls. “I said, ‘Oh my god, I love it! What do you mean have I ever seen it? Of course, I saw it! I love it! They’re making a 3?’ And they said, ‘Yeah, and there’s possibly a role for a badass female. Would you be interested?’ And I said, ‘Call up [director] Chad [Stahelski] right now, and get a meeting for me. I have to be in this movie.’”

I sat down with Berry in New York City for this week’s episode of Variety and iHeart’s new film podcast “The Big Ticket.”

Berry appears in “John Wick 3” as Sophia, a mysterious woman from John Wick’s past who he asks for help when a bounty is placed on his head.

In one scene, Berry kills what seems like dozens of men (I tried to keep count but, due to the speed and frequency of the killings, it was an impossible task).

Assisting Berry in the fight are two ferocious Belgian Malinois attack dogs. The dog training went so well that she brought some of her newfound skills home and applied them to her two Labradoodles. When I laughed at the thought of attack Labradoodles, Berry warned with a wicked smile, “OK, come to my house and try to attack me — your ass won’t be laughing when you leave. Your ass is going to be bit up and you might be without your balls.”

The Oscar winner will be doing some more fighting in the upcoming drama “Bruised.” Not only is she starring in the movie as an MMA fighter, but the film also marks her directorial debut.

“I read the script, and I loved it,” Berry said. “It was written at the time for a 22-year-old white woman which, obviously, can’t be me. But I was able to convince producers why it should be me and why it would be more relevant in the times in which we’re living if it were me. I talked about all the elements of the filmmaking, what I saw in my head, and they bought it. They thought, ‘Wow. Makes sense.’”

No surprise, but Berry could never have imagined when she was starting out that she would one day be able to even suggest herself for a role that was written for a white woman. “I was just the token when I first started,” she said. “I was on a lovely television show [‘Living Dolls’] where I would start the scenes, ‘Hello, everybody,’ and I would end them, ‘Come on, let’s go.’ That was my part. At the time, I was happy to be there.”

“At the time I thought, as odd as it sounds coming out of my mouth right now, I was kind of happy to be there because women of color weren’t really working,” she continued. “To be sitting here now, realizing that I was able to create this opportunity for myself, lets me know for sure it’s a new day.”

And it’s not every day that I get to talk to Berry about her love of women’s MMA fighting.

“It’s hard to think about women punching each other. It’s not in our DNA. We’re not wired that way really, but when I see women fight, one, I feel empowered to see women — these badass women handling it,” she said. “I also love that when I see women fight we’re much more emotional when we fight. I’ve always loved their fights for that reason. They’re more exciting to me. I have a sense of feeling anything can happen with a woman because we come from that emotional place.”

What does Berry think about a reboot of her 1997 comedy “B*A*P*S”? Find out by listening to “The Big Ticket” below:

You can check out “The Big Ticket” at iHeartRadio or wherever your favorite podcasts are found.