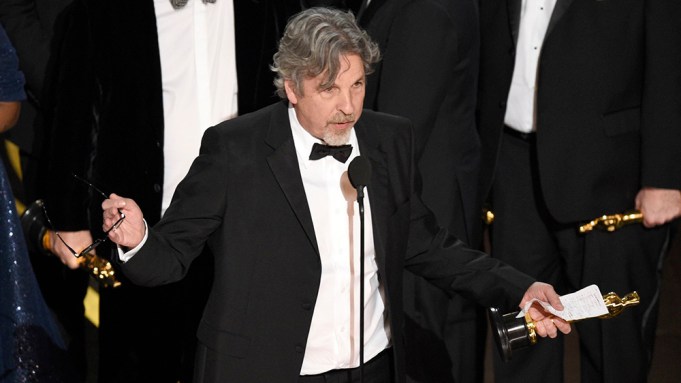 Spike Lee was the first of many celebrities to express their displeasure with the final results of the 2019 Academy Awards, wherein the night’s biggest prize for best picture went to “Green Book.”

The Peter Farrelly-directed film, which stars Mahershala Ali and Viggo Mortensen, has fielded controversy throughout awards season. It tells the story of an unlikely friendship that blossoms between pianist Dr. Don Shirley and his driver Tony “Lip” Vallelonga as they make their way together across the American south.

Lee, whose film “BlacKkKlansman” was also in the running for best picture, took home the Oscar for best adapted screenplay. After Julia Roberts announced “Green Book” as the winner, Lee was seen waving his arms in anger before attempting to exit the theater, but was stopped at the doors and made to return to his seat for the remainder of the ceremony.

Backstage, Lee told reporters he thought the Academy had made a “bad call,” and later commented while drinking champagne, “This is my sixth glass and you know why.”

In the aftermath, Twitter has been alight with reactions to the controversial win.

A gif of “Black Panther” star Chadwick Boseman’s face as the results came in speaks volumes:

Journalist Jemele Hill, currently a writer for the Atlantic and formerly an ESPN commentator, jumped in on a running joke that imagines misguided “compliments” from white people coming from “Green Book.”

Some of Green Book’s best friends are black movies.

For anyone who may be interested in what the Green Book actually was, here is a link to more information about this act of resistance and source of love and survival for many African-Americans. It started with Victor Hugo Green. #OSCARS https://t.co/gdFp1mekub pic.twitter.com/9WkeInv2fd

The ouroboros that is white folks telling me that “real black people” loved Green Book – as some have done in the last few days – is something I’ll never quite get over.

WANTED: Old racist white man to drive me around to my comedy gigs. In return I will teach you about racism and cornbread. After you learn everything, we will sell our story to Hollywood. Please DM Your resume and fav racial slur. Thank you. I’m repped by WME.

Green Book was not for Black people.

It was to make white people feel good about doing little to stop racism beyond the interpersonal.

Also, the other movies were better.

I wish folks would stop jumping in Black people’s mentions Whitesplaining how we should feel about Green Book. Y’all are annoying af. Go be productive and instead educate yourselves on Victor Hugo Green and the REAL history of Green Book travel book.

In what universe Green Book better than Blackklansman, Roma, Black Panther, Favourite and a Star is Born? America 2019. #Oscars

Soooo, let's just be absolutely clear: "Green Book" was definitely not the Best Picture of the year, but it was certainly the most comforting movie for fragile white people who need that sort of thing in our Era of Trump.#Oscars

"Green Book is an inspirational tale of how we can end racism if everyone, regardless of background, just works together. So please welcome the stage the producers of Green Book: 1000 white guys who were all born in 1961" pic.twitter.com/XW6nzqJc9q