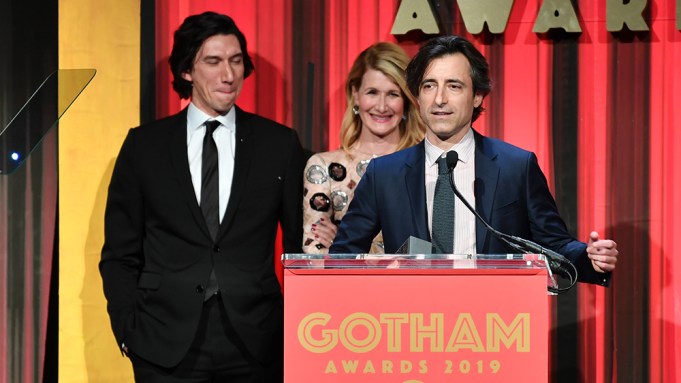 “Marriage Story,” a drama about a painful divorce between a loving Hollywood couple, won best feature at the Gotham Awards in downtown Manhattan on Monday night.

The annual event in early December, hosted by the Independent Filmmakers Project, resembles the Iowa caucus as the first stop on the long and tangled road of awards season. And like in Iowa, many campaigners put on a brave face — in the middle of a snowstorm this year — as they delivered carefully scripted speeches, designed to win approval and gain votes.

The biggest winner of the night was Netflix, which released “Marriage Story.” The streaming giant managed to wrestle away six trophies (out of 10 that were handed out) for a celebration that is supposed to be devoted to independent story tellers.

Ava DuVernay’s “When They See Us” won best breakthrough series (long format), and Netflix’s “American Factory,” about a Chinese billionaire who opens a new factory in an abandoned General Motors plant, setting off tensions between the owners and the workers, won best documentary.

That theme of disruption was on display in more ways than one, as Netflix seemed to dominate the evening in both size and scope. Executives had bought up three of the VIP tables closest to the stage, relegating indie distributors from other companies to the back of the Cipriani Wall Street ballroom.

During one of his many trips to the podium, Baumbach thanked Netflix’s chief content officer Ted Sarandos (who was in attendance) for financing his movie and saving the Paris Theatre, the historic one-screen venue in midtown Manhattan that will now host Netflix releases and parties. The moment, of course, was scripted, a testament to just how formidable Netflix could be — with three other major awards titles in the form of “The Irishman,” “The Two Popes” and “Dolemite Is My Name” — in this year’s Oscars race.

Awkwafina won best actress for “The Farewell,” a drama about a young American who returns to China to tend to her ailing grandmother.

“Holy shit!” Awkwafina said. “Oh my god, I didn’t write anything and they were like, ‘You should write something!’ Oh my god. I never won anything. I can’t even win an argument in the Instagram comments.”

She added: “I would like to thank grandmas everywhere for spoiling us, for loving us and for believing us.”

While the Gotham Awards are decided by small juries comprised of actors, filmmakers and journalists, the ceremony still plays into the narrative of who’s up and who’s down, which could be crucial this year given that the Oscars will be held three weeks earlier on Feb. 9. To gain coveted time with the more than 600 attendees, three of the actresses from “Hustlers” — Jennifer Lopez, Constance Wu and Julia Stiles — all served as presenters.