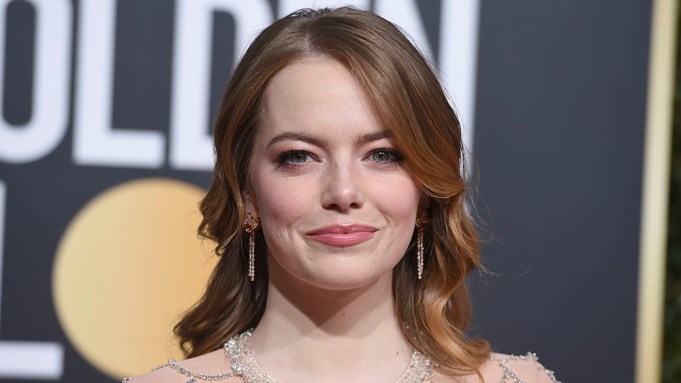 Emma Stone apologized once again for “Aloha” after Sandra Oh made a joke about the film during the Golden Globes monologue.

Oh, who co-hosted this year’s ceremony with Andy Samberg, quipped that “Crazy Rich Asians” was “the first studio film with an Asian American lead since ‘Ghost in the Shell’ and ‘Aloha.'”

Stone portrayed a part-Hawaiian and part-Chinese woman in Cameron Crowe’s 2015 film “Aloha,” which garnered criticism for whitewashing an Asian role. “I’m sorry!” Stone was heard shouting from the audience.

Sandra Oh: ["Crazy Rich Asians"] is the first studio film with an Asian American lead since "Ghost in the Shell" and "Aloha."

The actress, nominated for her performance in Yorgos Lanthimos’ royal drama “The Favourite,” has apologized for her role in “Aloha” before. In a 2015 interview, Stone said the controversy around her casting has opened her eyes “in many ways.”

“I’ve become the butt of many jokes,” Stone said. “I’ve learned on a macro level about the insane history of whitewashing in Hollywood and how prevalent the problem truly is. It’s ignited a conversation that’s very important.”

“Ghost in the Shell,” a 2017 remake of a Japanese manga, starred Scarlett Johansson, who also caught criticism for portraying a Japanese character. Johansson addressed the issue in an interview with Marie Claire, saying “I certainly would never presume to play another race of a person” and that she took the role because of the rarity of female leads in a film.

“Diversity is important in Hollywood, and I would never want to feel like I was playing a character that was offensive,” she added.