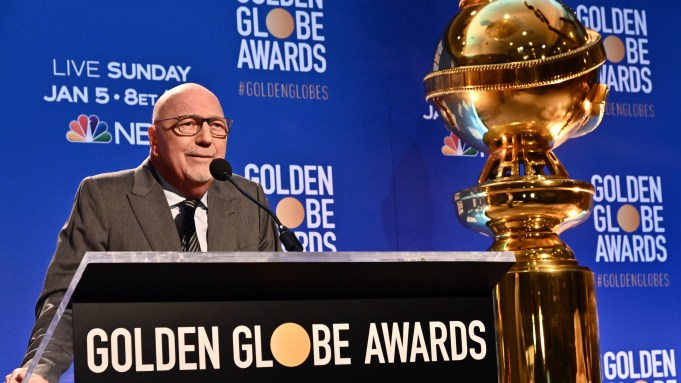 Despite gains in the number of films and TV shows helmed by women, female directors were completely shut out of the Golden Globes once again this year.

The snub was immediately called out on social media, with filmmakers like “Honey Boy” director Alma Har’el tweeting, “do not look for justice in the awards system.” However, Hollywood Foreign Press Association president Lorenzo Soria defended the move by saying the organization votes based on film, not gender.

“What happened is that we don’t vote by gender. We vote by film and accomplishment,” Soria told Variety’s Marc Malkin at the Globes announcement Monday morning.

In addition to Har’el, some of the major snubs included Lulu Wang (“The Farewell”), Greta Gerwig (“Little Women”), Lorene Scafaria (“Hustlers”), Olivia Wilde (“Booksmart”) and Marielle Heller (“A Beautiful Day in the Neighborhood”).

Instead, the HFPA nominated Bong Joon Ho (“Parasite”), Sam Mendes (“1917”), Todd Phillips (“Joker”), Martin Scorsese (“The Irishman”) and Quentin Tarantino (“Once Upon a Time in Hollywood”).

“Every year, somebody gets left out,” Barry Adelman, one of the executive producers of this year’s Globes, told Variety. “There’s so much talent going on, maybe we need to expand the categories so more people can be part of it. I also think that if you look at some of the other things…a lot of the big television shows are created by women, so I think across the board there is a good representation. Maybe in a couple of those categories, we wish it could be a little different. Who knows what will happen next year.”

Only five women have ever been nominated for directing in the 77-year history of the Golden Globes. Most recently was Ava DuVernay (“Selma”) in 2015, and the others are Barbra Streisand (“Yentl” and “The Prince of Tides”), Jane Campion (“The Piano”), Sofia Coppola (“Lost in Translation”) and Kathryn Bigelow (“The Hurt Locker” and “Zero Dark Thirty”).