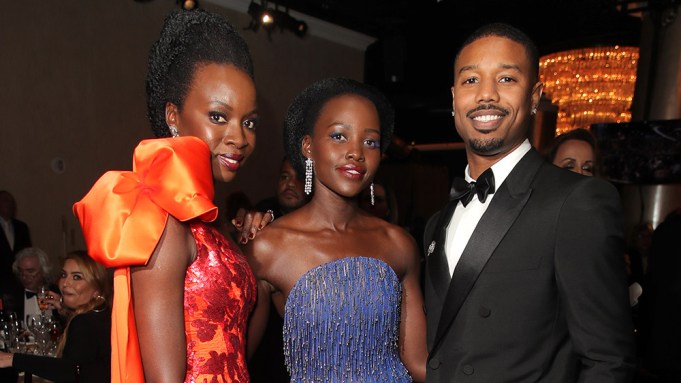 The reason that the Golden Globes are often billed as Hollywood’s best party is that it’s really the only awards show that feels like a fun wedding with tons of celebrity guests. The 76th edition of the ceremony held on Sunday night included its share of left-field surprises — such as “Bohemian Rhapsody” winning best picture, drama, over “A Star is Born” — but inside the ballroom at the Beverly Hilton Hotel, the trophies almost feel like an afterthought.

The actors in attendance drink, get up, mingle, and hang out at an outdoor smoking balcony just at the back of the room. The fact that there’s so much background noise on TV isn’t an accident. The guests, particularly those not seated by the stage, are too busy talking to each to other to actually watch the show. Here are the nine biggest secrets from inside the ballroom that you didn’t get to see on TV.

1. The Mob Scene at the Entrance
After the trek down the red carpet, the guests attending the Globes enter the ballroom, where they are met by a crowd of iPhone picture-snapping fans. Sometimes actors are excited to take photos with each other — such as Judith Light with Dominique Jackson (“Pose”). But more often than not, they just want to find their seat. As “Black Panther’s” Lupita Nyong’o entered the room holding hands with her co-star Michael B. Jordan, she stopped. “We lost one,” Nyong’o said, as they both waited for their colleague Danai Gurira, who was a few steps behind them. Then Halle Berry walked by. “Hi baby,” Berry said to Jordan. “How are you?” Timothee Chalamet and his date — his mom — happily posed for the photographers. Keri Russell walked by more quickly. Adam Driver bypassed the entrance, and took a side route by the back tables with less congestion.

Timothee Chalamet brought his mom as his date. #GoldenGlobes pic.twitter.com/8tm863WqML

2. Dinner Is Served Early
This year’s menu included sweet potato vichyssoise, Chilean seabass, and a pistachio cream cheese chocolate cake. But nobody ate a bite of any of it during the ceremony. To avoid the sound of clinking silverware on TV, the waiters at the Globes served dinner at around 3:30 p.m., when most of the guests are still on the red carpet. But if you’re starving, there’s a cheese and dessert platter in a back bar. Before the show started, Felicity Huffman and William H. Macy were seen taking a plate of chocolate-covered strawberries to their table. Melissa McCarthy came more prepared. She revealed to Variety that she snuck in 30 ham sandwiches, which she handed out to her friends who were hungry during the three-hour-plus show.

Here’s the menu for the #GoldenGlobes. But to avoid the sound of clinking forks on TV, dinner is served now, while most of the actors are still on the red carpet. pic.twitter.com/qzEoYc2KuO

3. Andy Samberg and Sandra Oh’s Monologue Played Better in the Room Than on Twitter
Although the hosts of the Globes received mixed reviews, they had the room’s attention. The crowd was rooting for them, and gave them about the same warm reception as Tina Fey and Amy Poehler (the best Globes co-hosting duo in recent memory). “I loved it,” Lady Gaga told Variety later about the monologue. “It was great.” Gaga laughed at the joke they made about her “A Star Is Born” press tour, where she kept saying that she only needed one person (Bradley Cooper) in a room of 100 to believe in her. “Oh God. I don’t mind it at all.” She’s seen the memes. “It’s hilarious.”

4. There’s a Smoking Patio to Escape the Show
Unlike other awards shows, which try to keep all the attendees in their seats for as long as possible, the Globes encourage mingling. One place that many A-list actors go for an escape from the main event is the smoking patio. According to an unscientific Variety survey, the three actors who spent the most time hanging out outside were Viggo Mortensen, Hugh Grant, and Luke Evans. And some of the winners, such as Patricia Arquette, took a break, because they needed the fresh air.

5. Sweating It Out
If some of the guests looked shiny on TV, it’s because the temperature inside the Globes was uncharacteristically hot.

6. The Award for Most Selfies Goes to…
Richard Madden, who won for the Netflix drama “Bodyguard,” gladly took selfies with fans while posing with his new statue. He even hammed it up, taking a bite of the trophy in one snapshot.

Richard Madden posing on the smoking patio with his Golden Globe. #GoldenGlobes pic.twitter.com/pTXZJeWyHK

7. Yes, Even the A-List Stars Wait in Line for the Bathroom
At the Oscars, you’ll need to exit the theater to use the loo. But not so at the Golden Globes. The bathrooms are located at the back of the room, on both sides of a door where the winners exit to take questions from the press. In the middle of the show, this area became quite crowded, as we caught a glimpse of Lady Gaga cradling her Golden Globe for best song like a baby. And no, there’s no way of cutting the bathroom line, even if you’re a celebrity. We spotted Laura Dern, Mahershala Ali, and Ryan Coogler waiting with everyone else.

8. Starstruck Stars
Before Glenn Close pulled off one of the biggest upsets of the night, winning best actress in a drama film, she had a nice moment with one of her competitors. “I can’t believe I am nominated with you,” Lady Gaga told her. “I really can’t.” Jim Carrey seemed to spend every commercial in a deep conversation with somebody — from Jeff Bridges to Melissa McCarthy. Bradley Cooper got up throughout the night to accept compliments from admirers. And Troye Sivan was thrilled to meet Lady Gaga. “I told her I was a big fan, and she said, ‘Thank you Troye!’ She told me to have a beautiful night.”

9. The Party Sightings
Taylor Swift was a surprise presenter for best song, but she didn’t take a seat inside the ceremony. She later showed up at the Fox and Netflix parties with her boyfriend, “The Favourite’s” Joe Alwyn. The glitziest soiree was hosted by In Style/Warner Bros. Laverne Cox hugged Debra Messing. Ben Stiller chatted with Adam Driver. Rosamund Pike danced. Even Pete Davidson made an appearance. “I’m doing good, man,” he said. And for more about what happened late into the night, check out Variety‘s official party report.

Yes, this @taylorswift13 at the @Fox Party. @goldenglobes @Variety pic.twitter.com/rkGSe2HVQQ