Box Office: ‘Godzilla: King of the Monsters’ Stomps to $6.3 Million on Thursday Night 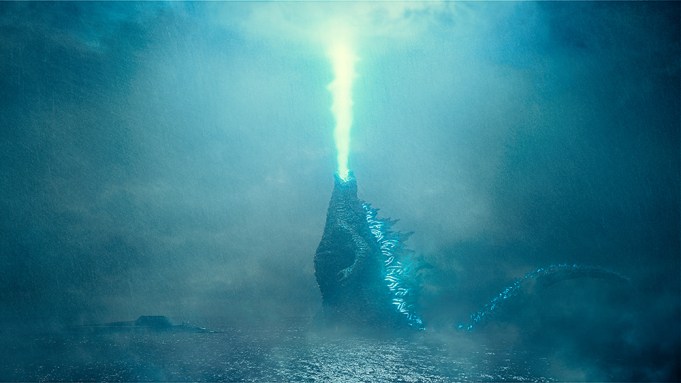 The sequel to 2014’s “Godzilla” (and the 35th feature about the titular beast) is expected to earn $50 million to $55 million during its first three days in theaters. It’s poised to finish in first above the sophomore frame of Disney’s “Aladdin,” and the debuts of Paramount’s “Rocketman” and Universal’s horror-thriller “Ma.” “Rocketman” took in $1.8 million and “Ma” made $1.4 million at 2,400 sites from Thursday night previews.

“Godzilla: King of the Monsters,” the third installment in Legendary’s MonsterVerse, will likely wind up well behind the original, which launched with $93 million and went on to collect $200 million at the domestic box office and $529 million globally.

“King of the Monsters” should instead debut in the same neighborhood as 2017’s “Kong: Skull Island,” the second entry in Legendary’s monster franchise, which opened with $61 million in North America, and wound up with $168 million domestically and $566 million worldwide.

Directed by Michael Dougherty, “Godzilla: King of the Monsters” centers on the eponymous monster who faces off against his nemesis, King Ghidorah, and other ancient mythic creatures that are wreaking havoc on Earth. The film stars Millie Bobby Brown, Vera Farmiga, Kyle Chandler and Bradley Whitford.

“Rocketman,” a musical about the life of Elton John, should amass around $20 million from 3,610 venues. Universal and Blumhouse Productions’ “Ma,” a horror movie starring Octavia Spencer, is expected to make between $18 million and $22 million from 2,808 screens.

“Aladdin” should be runner-up after an impressive $116 million haul during the four-day Memorial Day weekend. The live-action reboot of the 1992 animated classic could add another $36 million to $45 million during its second weekend in theaters.

North American moviegoing for 2019 had hit $4.44 billion as of May 29, down 8.9% from the same time a year ago. Despite the decline, Comscore’s Paul Dergarabedian remains optimistic that the gap can be closed.

“Three high-profile wide-release newcomers hit theatres in this post-Memorial weekend frame that boasts an incredible array of movies big and small with something for virtually every moviegoer, and with ‘Ma,’ ‘Rocketman’ and ‘Godzilla 2’ joining ‘Aladdin,’ ‘John Wick 3,’ ‘Booksmart’ and ‘Brightburn, no one can say Hollywood isn’t offering up plenty to choose from at the multiplex,” he said.