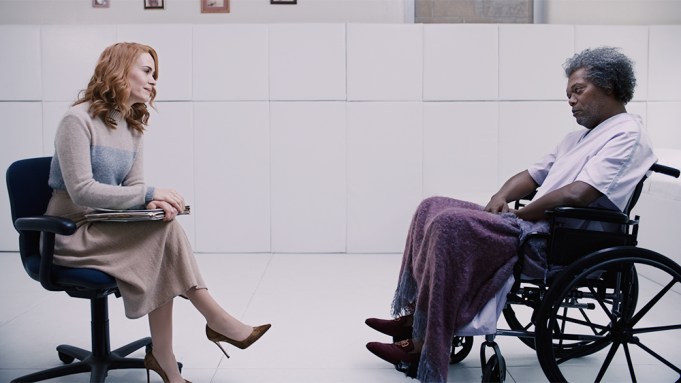 Universal’s thriller, a sequel to “Unbreakable” and “Split,” will likely finish the frame with about $88 million and three consecutive box office crowns in its first 17 days. STX’s fourth weekend of “The Upside” looks to beat out Sony’s opening of “Miss Bala” for second place with between $7 million and $8 million at 3,568 venues.

Gina Rodriguez’s “Miss Bala” will take in a meager $6 million at 2,203 venues as the weekend’s only new wide release. Forecasts had estimated that “Miss Bala” would draw between $6 million and $10 million by Sunday. Sony anticipates a debut in the $5 million range.

“Miss Bala” marks “Jane the Virgin” star Rodriguez’s first starring role in a studio pic. She portrays a woman forced to take on Mexican drug lords after her friend is kidnapped. Catherine Hardwicke, the filmmaker behind “Twilight,” directed “Miss Bala,” which carries a $15 million price tag.

A trio of holdovers are competing for fourth in the $4 million to $5 million range — Sony’s eighth weekend of “Spider-Man: Into the Spider-Verse,” Warner Bros.’ seventh frame of “Aquaman,” and Universal’s 12th weekend of awards-season contender “Green Book.”

“Into the Spider-Verse,” which received an Oscar nomination for animated feature, will hit $175 million by Sunday and “Aquaman” will finish in the $323 million range. “Green Book,” which earned five Oscar nods, should pass $55 million.

Studios have long shunned opening major releases during the Super Bowl, reasoning that the game and attendant festivities make for a challenging scenario in which to attract moviegoers. The Super Bowl weekend has seen five box office frames of less than $100 million in total business since 2013, with declines from the prior weekend between 27% and 57%.

In 2018, Sony’s seventh weekend of “Jumanji: Welcome to the Jungle” won with $10.9 million, edging out the sophomore frame of Fox’s “Maze Runner: The Death Cure” with $10.5 million and the opening of Lionsgate’s “Winchester” with $9 million. The box office hauled $95 million in total, down 52% from the previous weekend.

The lowest-grossing film to win the domestic box office in recent years was Nicolas Cage’s “Bangkok Dangerous,” which brought in $7.8 million for Lionsgate during Sept. 5-7, 2008.

The current weekend will extend the 2019 slump, with the year-to-date domestic box office plunging 16% to $797 million as of Jan. 30, according to Comscore. Business should pick up next weekend with the debuts of Warner Bros.’ “The Lego Movie 2: The Second Part” and Paramount’s “What Men Want.” The “Lego Movie” sequel has been forecast to open with about $50 million.