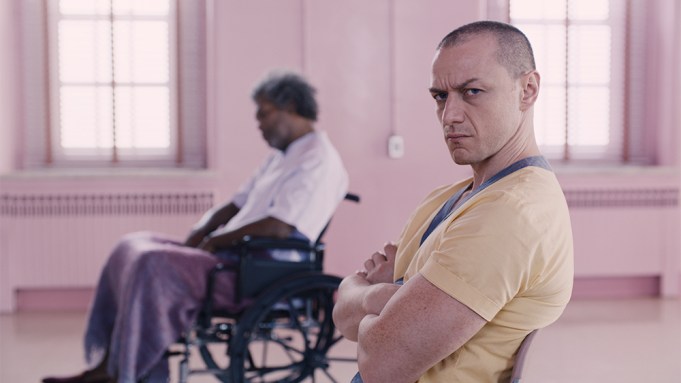 After autobots and aquatic kings have dominated foreign markets over the past few weeks, a different kind of hero has risen to the top of box office charts. M. Night Shyamalan’s “Glass” is the new champ overseas, pulling in $48.5 million from international territories.

The supernatural thriller, a sequel to 2000’s “Unbreakable” and 2016’s “Split,” debuted in North America with $40 million over the weekend for a global start of $89 million. Estimates show “Glass” could add $7 million to its domestic tally through the Martin Luther King Jr. holiday on Monday, putting its projected four-day haul at $95.5 million.

Despite mediocre reviews and an unenthusiastic audience reception, “Glass” is pacing ahead of its predecessor “Split” in a number of territories. “Glass” saw a handful of No. 1 openings among markets it was released, including Russia ($5.2 million), Mexico ($4.5 million), and the United Kingdom ($4.3 million).

“Glass” took down reigning victor “Bumblebee” for the top spot internationally, but Paramount’s “Transformers” origin story still had a robust weekend overseas. “Bumblebee” has now jumped the $400 million mark worldwide and is just shy of $300 million from foreign markets. Its abroad tally currently sits at $296.4 million after adding $20.9 million from 64 territories this weekend.

Directed by Travis Knight and starring Hailee Steinfeld, “Bumblebee” had the best showing in China, where it ranked No. 1 for the third weekend. It earned $16.3 million, taking its total in the Middle Kingdom to a strong $137.7 million.

Warner Bros.’ superhero adventure “Aquaman” also brought back solid ticket sales with $14.3 million from 79 overseas markets. That takes its international haul to a mighty $759 million. Globally, the aquatic tentpole starring Jason Momoa has pocketed $1.06 billion, with $289.7 million of that haul from China alone. Top holdovers this weekend include Australia with $1.5 million, Germany with $1.3 million, and France with $1.1 million.

Meanwhile, Fox’s “Bohemian Rhapsody” drummed up another $11.3 million this weekend, bringing its international total to a massive $596 million. Along with its $200 million bounty in North America, the Queen biopic is nearing $800 million worldwide.

Another movie musical, Disney’s “Mary Poppins Returns,” a sequel to the 1964 classic, has surpassed a major milestone of its own. The musical, starring Emily Blunt and Lin-Manuel Miranda, has crossed $300 million globally after adding $6 million from international territories in its fifth weekend of release. In North America, it has passed “La La Land” ($151 million) to rank as the fifth-biggest live-action musical.

Rounding out the top five is Universal’s “How to Train Your Dragon: The Hidden World,” earning $10.8 million from 13 international territories for an international total of $29 million. The animated fantasy film debuted in Brazil, where it earned $3.7 million, along with Colombia ($1.3 million) and the Netherlands ($1.3 million). The third installment in the “Dragon” series opens in North America on Feb. 22.