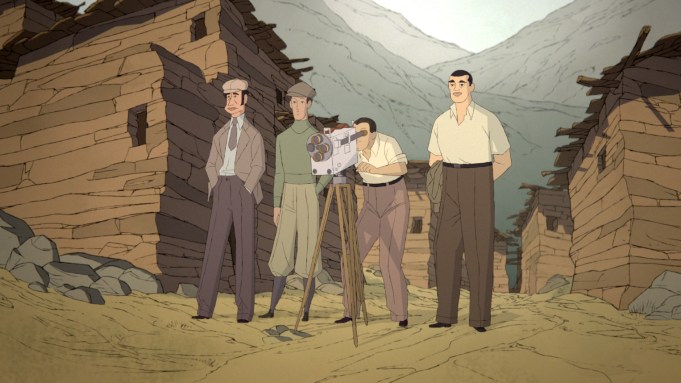 MADRID —  In 1925, Luis Buñuel, son of one of the richest men in the Spanish region of Aragón, went to Paris to make films with Salvador Dalí. The results were two surrealist shorts, 1929’s “Un Chien Andalou,” his passport to membership of André Breton’s surrealists, and “L’Age d’Or,” banned by the Paris police.

The movies are galvanized by the joie de vivre of the young directors, but as much Dalí in their daring as Buñuel.

By 1933, however, when Buñuel returned from shooting he 29-minute documentary “Las Hurdes” (aka “Land Without Bread”) filmed in a region of Western Spain, one of the world’s greatest film directors has found his own creative voice, an explosive mix of surrealism and social critique.

Salvador Simó’s “Buñuel in the Labyrinth of the Turtles,” sold by Latido, lead-produced by Manuel Cristobal and acquired for North America by New York’s Gkids, the distributor of 11 Academy Award nominated animated features, has just received its first full North American trailer, dropped by Gkids.

Gkids will release “Buñuel in the Labyrinth of the Turtles” in theaters later this year.

The trailer shows very clearly the ethical journey of Buñuel, as he attempts to emerge from Salvador Dalí’s shadow, and acquires a humanistic social conscience. That will be found to a larger or lesser extent throughout his remaining career, even in his last “French” phase when, 40 years later, he captures in still surrealism-laced stories, the self-obsession, disavowal and imperturbability of the French bourgeoisie.

The trailer’s date of release coincides with Buñuel’s birthday. It highlights the unusual style of “Buñuel,” made in simple-lined 2D which forefronts facial expression and psychological observance, and with somber pastels, capturing the rugged mountains of Las Hurdes.

The browns and grays “mimic black-and-white cinematography of the era,” Peter Debruge wrote in his Variety review. The hand-drawn animation creates a sense of dream and reality, at the heart of surrealism, he adds.

For Buñuel, the Hurdes which he found was not wild enough to shock enough. Claiming the cliffs were so precipitous that even goats lost their footing, Buñuel was forces to shoot one with a rifle (his shadow seen quite clearly in “Las Hurdes” to capture it tumbling down rocks to its death).

“Buñuel in the Labyrinth of the Turtles” won a Special Jury Prize at Los Angeles’ Animation is Film Festival, organized by Gkids, France’s Annecy Intl. Animation Festival and Variety.

“The animation is very European, totally 2D,” Cristóbal said of “Buñuel in the Labyrinth of the Turtles,”  a Sygnatia/The Glow Animation/Submarine/Hampa production.