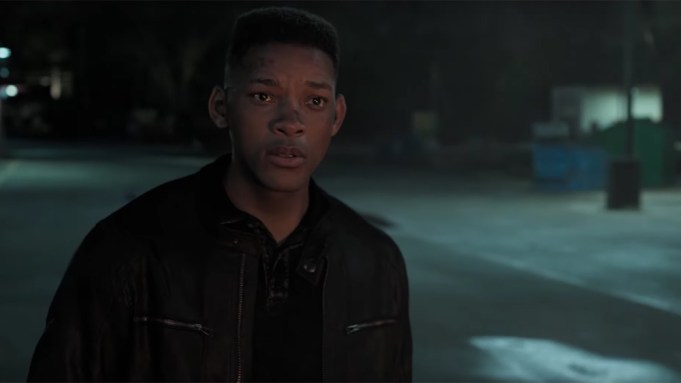 Will Smith battles a familiar antagonist in the official trailer for Ang Lee’s “Gemini Man” — himself.

Paramount Pictures and Skydance Media dropped dazzling new footage of the futuristic sci-fi drama, scored to a haunting version of “Forever Young,” that sees Smith playing an elite assassin. Things get tricky when he finds out the man he is assigned to track down is a younger version of himself who can predict his every move.

“Tell me something,” Clive Owen’s character asks Smith. “Why is it so hard for you to kill this man?”

“He knew every move of mine before I made it,” Smith’s character says before learning the identity of his target. “I’d have him right there, I’d take the shot, and he would be gone — like a ghost. Who is he?”

The actor pulls off double duty, playing both the 50-year-old and 23-year-old version of himself in “Gemini Man,” thanks to stunning technology that de-ages Smith nearly a quarter of a century.

“They chose me because there’s never been anyone like me. We have to end this right now,” Smith’s character explains to his younger self.

The studio first teased footage of “Gemini Man” at CinemaCon, the annual trade show for theater owners. Smith explained the new technology saying, “I’m 50 years old now, and I don’t know that I would have had the experience to play a 23-year-old me [earlier in my career].”

Lee joked to the crowd of exhibitors, “If you’re a director and you get to work with Will Smith, you should consider yourself lucky — and thanks to new technology, I get two.”